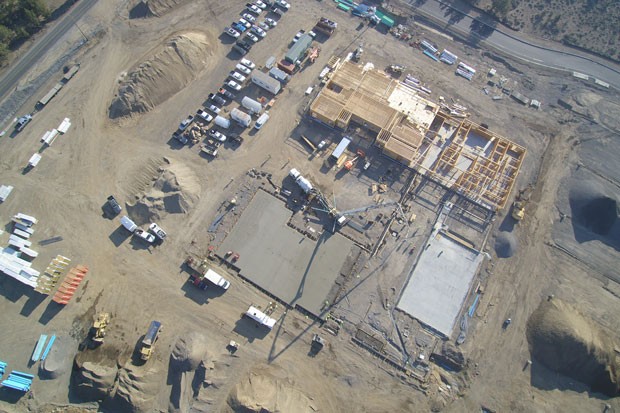 School might have been out for the summer, but staff at Bend-La Pine Schools have been keeping busy over the past few months. Projects completed or underway include a new elementary school—set to open in the fall of 2019, safe lobbies and remodeling projects, as well as planning for a new high school.

Funds for these projects came from a 2017 construction bond, in which voters authorized the district to sell $268.3 million in bonds to fund the construction of two new schools and 150 safety, maintenance and classroom addition projects, according to the district.

Kirby Nagelhout Construction is the lead contractor on the new, "600-seat," energy efficient school, which will serve students in northeast and northwest Bend. Mike Tiller, executive director of facilities for Bend-La Pine Schools, said about half of the framing and foundation work is done. He said about 100 people are working on the project, located at the corner of Cooley and OB Riley Roads.

Alandra Johnson, communications specialist for the district, said the new school doesn't have a name yet, but the district will promote community participation on its social media after the first week of school.

Marshall High School—used as an alternative high school in Bend for the last 25 years—is transitioning to the career and technical education hub for the district. Construction there includes two new classrooms and a gymnasium, according to Tiller. Marshall previously had a cafeteria that transformed into a gym, with one basketball hoop, Tiller said.

The 50-year-old Pilot Butte Middle School is in year one of a five-year program to remodel the interior of the school. Tiller said the school hasn't seen an update since its construction in the late 1960s. He said the main focus is science classrooms, the front office, the creation of a secure lobby, the cafeteria, gym and music rooms.

Lava Ridge Elementary school, which serves students in far northeast Bend, went through class renovations over the summer, with the replacement of old lighting systems with LED lighting. Johnson said the LED lights will save about $10,000 a year in power costs.

Other projects underway or completed:

At Sky View Middle School on NE 18th Street, the district worked on the parking lot, the secure lobby and accessibility upgrades over the summer, Tiller said.

Bend Senior High School received $15 million from the 2017 bond. Johnson said there have been meetings about what to use the money on, and this fall a committee will work on a master plan for upgrades and modernization for Bend's oldest in-use high school.

Meanwhile, Bend's new high school, slated to be located on SE 15th Street, just north of Knott Road, is still in the design phase. BBT Architects conducted two days of focus groups with 100 people, composed of students and staff, and will continue honing the design based on the feedback from those groups.