Cultivating Growth: for Plants and youth 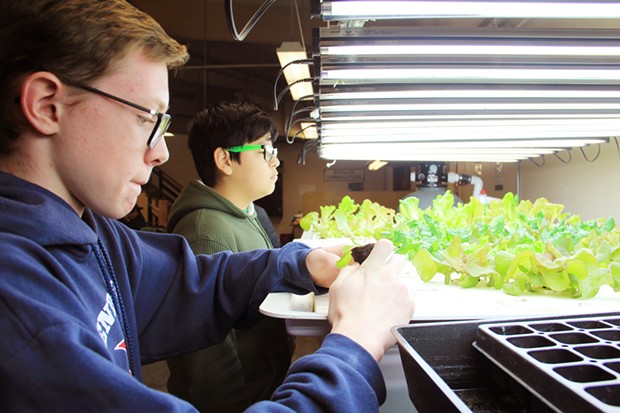 During their lunch break, a handful of tweens bounce back and forth from several giant containers of water and a long table scattered with test tubes, eye droppers, additives and charts associating colors with chemicals in parts per million. The entire scene could easily be mistaken for a mad scientist's laboratory. But creating a monster isn't the goal here; these students are aiming for lettuce.

During the lunchtime Aquaponics Club at Pilot Butte Middle School, students sacrifice a portion of their social period several days a week to tend an unconventional indoor garden. This includes harvesting every other week (greens are sold to teachers), frequently testing the water to make certain chemicals are in balance and teaching other students about the process.

Under the direction of their science teacher, Colleen Behrens, four of the students who look after the school's aquaponics garden reveal its simple closed loop process. Isaac Gill, who wants to be a scientist when he grows up, says goldfish are the key to the garden. They are housed in the first two containers of water. When Isaac feeds the goldfish, they produce ammonia. The grey water containing the fish ammonia excrement gets syphoned into a container with bacteria, which consume the ammonia and produce nitrates.

Fellow student, Samuel Cruzier, shows off the tube that pipes the water with nitrates into the water containers sitting below the lettuce plants—in place of soil. Then, Manny Arvizu demonstrates how to test the ammonia levels while Kahlan Kim explains how to test for nitrate content.

After a field trip four years ago, Behrens points to Volcano Veggies, a local aquaponics farm business, as instrumental in the inception of Pilot Butte's aquaponics garden.

During the upcoming spring semester, Isaac, Samuel, Manny and Kahlan will teach fellow students about photosynthesis, bacteria, symbiosis and sustainability through the lens of the garden.

Across town, at the Westside Village Magnet School, a more traditional garden has taken root.

Principal Wendy Winchel says the following quote captures the school's reasoning for creating a campus garden. "Gardening offers hands-on, experiential learning opportunities in a wide array of disciplines, including the natural and social sciences, math, language arts (through garden journaling), visual arts (through garden design and decoration) and nutrition. With recent concern over relatively weak science and math skills among American children, the need for innovation in science and math teaching is apparent. There is mounting evidence that students who participate in school gardening score significantly higher on standardized science achievement tests," (Klemmer, et.al. 2005).

And students agree. Archer Kerr notes that math just seems easier with the garden. Spending time measuring boxes and calculating soil and fertilizer in three dimensions has made word problems more accessible for him. Indigo Garcia said she enjoyed the friendly competition of building the garden boxes and then helping other teams after hers finished first. "The garden is a fun place to be, and calming," Indigo said.

"School gardens save lives. Our garden teaches kids lifelong skills, world experience, where their food comes from, how to peacefully connect and is a tool for building community," explains Winchel.

Kids say through the garden they have learned about worms, seed dispersal, germination, soil composition, backyard wildlife and native species. Westside Village even partnered with The Environmental Center to learn Zero Waste principles, and with Monarch Advocates of Central Oregon to learn about and create a waystation for Monarch butterflies in their garden. The Environmental Center has helped several schools get gardens off the ground, meanwhile working with Amity Creek Magnet Shool and others in their own garden on Kansas Street.

Charlie Cooper, who wants to build houses when he grows up, explains he was inspired to start his own garden in his backyard after working in the school's garden. "We have deer and I had to learn what works in my yard versus the school's. It started as a struggle but it has gotten better." Karen Moore shares that her yard is too small for a garden, but she likes to germinate tomatoes at home and then give them to neighbors.

Patrick Bluhm, teacher and one of the garden coordinators, said the garden is instrumental in demonstrating the uniqueness of the ecosystem in Bend, and harvesting from the garden for the school's community celebration every six weeks has been fun for the kids. A brick-fired pizza oven stands in the center of the garden which often produces food for school events.

Peppers, tomatoes, arugula, fruit and sunflowers were noted as some of the choice plants in the garden. Indigo remembered, "When I was much younger, maybe about three years old. I visited my older siblings in the school, I would walk through the garden and felt the sunflowers towering over me like I was in a jungle. The school and the garden are my second home."

Author's note: My favorite school garden is the Waldorf garden. What is yours? Answer us on social media and don't forget to attach a photo!