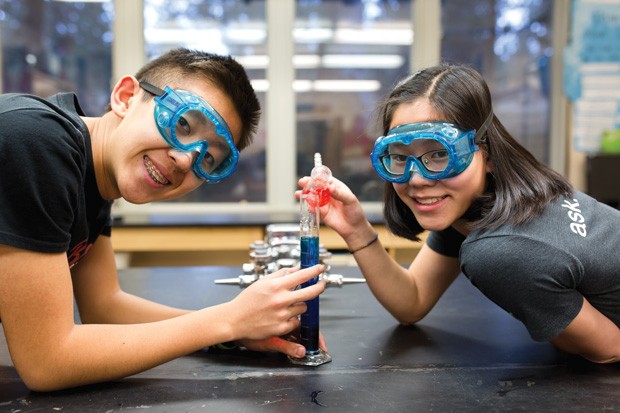 As David Bermudez, executive director and lead instructor for Bend Science Station walks through their new state-of-the-art building, explaining why things are the way they are, it quickly becomes apparent that the building may not have been designed by scientists, but it was definitely designed for scientists.

The Bend Science Station has been serving the public schools and the community for the past 16 years providing hands-on lab science to all students.

"We don't view science as a set of facts and books," Bermudez said. "We view it as a way to ask and answer questions in a methodical manner."

Asking questions and doing research is something that can be done anywhere, and it wasn't a limiting factor at their old headquarters at Central Oregon Community College's Chandler Lab—but now the process is more streamlined and efficient.

The move to OSU-Cascades has brought about many changes for Bend Science Station, but one of the biggest improvements is more space. In the former lab, the space was juggled between teacher training sessions, field trips and student labs. Now, with two mirror image labs, a separate space primarily for teacher trainings, and an additional, smaller space for long term experiments run by students, there is space for everyone—at the same time if need be, Bermudez explained.

You might not notice all this from the outside of the building, but what you will probably notice when you walk by is the tower rising above the rest of the single-story building. This serves multiple purposes, according to Bermudez.

"We used to have to set up all our pulley experiments in a tree and rent a scissor lift to do egg drops," Bermudez said.

Now he can do experiments like egg drops or testing Galileo's theory of falling objects in-house with no extra machinery. When it comes to pulley experiments, Bermudez takes one for the team and becomes the main object getting moved around. In the scenario, Bermudez has fallen into a crevasse, and it's up to the kids to get him out.

While the OSU-Cascades location has allowed more space for elementary and secondary students, it also benefits OSU grad students who are in the Masters of Arts in Teaching program. MAT students who are specializing in science can do some of their observations at Bend Science Station, which means less driving around and more time spent focusing on their program.

It doesn't stop at the grad school level, though. Bend Science Station also offers teacher training sessions where teachers can improve their science curriculums, compare lesson plans and learn how to use scientific equipment for experiments they can do in their own classrooms. Once they have created a lesson plan, they can check out that equipment for students to use in the classroom or on a field trip.

"Our teacher training has been a hugely successful program," Bermudez said. "With the reality of what public teachers have to do in classrooms, we're trying to drop as many hurdles to get science in the classroom. Teachers can get around the lack of curriculum or experience hurdles by getting fleshed-out lesson plans from the training sessions, and they can get around the equipment hurdle by checking out gear from our lending library."

Although the actual moving process was extremely quick—Bermudez and his three staff moved everything over a four-day period—the plan to move to OSU-Cascades has been going on for quite a while.

In 2013, COCC told Bermudez they weren't going to renew the lease for Chandler Lab, but would work with Bend Science Station until they found a new home. In 2014, they signed a letter of intent with OSU-Cascades, and the building officially opened on September 10, 2018.

It was important to Bermudez that they continue to be located on or near a college campus.

"There are so many synergies to being located on campus," he explained. "Every kid comes to Bend Science Station during 5th grade, and we want all kids to have a vision of attending college, whether it's for science or art or anything else. The easiest way to do that is to be located on campus."

The location also provided a lot of logistical benefits for Bend Science Station, such as not having to maintain a parking lot, and gave them some inspiration for the building features.

There is a 72-panel solar array on the roof which provides all the energy needed to run the building, making it a net-zero energy building—something OSU-Cascades is also working toward.

Bermudez said he thinks of this new building with its shed roof as a literal and metaphorical ramp to show kids the potential for growth. The roof points towards the rest of the campus, and every time a kid visits they will learn something new, whether it is how to come up with a scientific hypothesis, or that caffeine can act as a pesticide for mosquitoes.

"I like to call this new building our 'shrine to science'," he laughed.