Send in the Clown | The Source Weekly - Bend, Oregon

Send in the Clown

Rodeo fans need little introduction to JJ Harrison, one of the most sought-after rodeo clowns on the Northwest Pro Rodeo Association and Professional Rodeo Cowboys Association circuits. His quick humor and walk-and-talk antics have made him a fan favorite at rodeos from Central Oregon to Louisiana. Catch Harrison and his "act" each night during the 2019 Deschutes County Fair and Rodeo, where he'll be helping celebrate the fair's 100th anniversary.

"We are extremely excited to have JJ Harrison back for this year's rodeo," said Deschutes County Fair Marketing Coordinator Ross Rodgers. "He's one of the hottest rodeo clowns on the circuit."

"I didn't grow up in a big rodeo family, but I developed an interest in rodeo when I was in high school in Okanogan [Wash.]," said Harrison. "I wanted to be a cowboy for all the same reasons that every kid wants to become a cowboy—the lifestyle, the jeans, the hats, the girls and the certain gentleman courtesy that comes with being a cowboy."

That interest took flight when Harrison joined Washington State University's rodeo team. He competed as a bull and bronc rider, but tried every event there was. "I thought I was a good bull rider, but the less-than-spectacular bulls I covered gave me a false sense of confidence when I got a bull of any rank." Tired of being thrown, Harrison switched from riding bulls and broncs to team roping events, where he found success, but not a career.

Harrison graduated from WSU in 1998 with a teaching degree and eventually earned a master's degree in education from Arizona's Grand Canyon University while teaching science and social studies to eighth graders in Walla Walla, Washington. In his off-time he continued roping and training horses, balancing rodeo and teaching for eight years. In addition to his horse skills, Harrison is a natural-born entertainer with a quick wit and high energy.

“You don’t always get the Redmond 100th year anniversary rodeo. I’m proud to be chosen and to prove to people I’m the right guy to be there.” —JJ Harrison tweet this

Recognizing Harrison's abilities as an entertainer, Pat Beard of the Beard Rodeo Company asked Harrison to be a rodeo clown at a local Vancouver event in 2003. "He said, 'You should be my rodeo clown,' and I thought that would be the dumbest thing ever," said Harrison, who also wasn't keen on the idea of wearing makeup or seeking refuge in a 150-pound aluminum barrel while a 2,000-pound bull was trying to destroy it.

Nowadays, he wears that makeup about four days a week.

"I don't mind being called a rodeo clown, but my job is an entertainer," said Harrison. "I don't think anybody looks at my face and giggles because I'm wearing makeup. I want to be seen as the entertainer at this event, as the guy who makes you laugh and makes you part of the show."

His unscripted and off-the-cuff humor allows his comedy to develop in front of the fans. "The best advice I can give to someone who wants to be a rodeo clown is to read the local paper before you get there," said Harrison. He looks for topics which are relative to the crowd; local issues and people that he can have fun with. 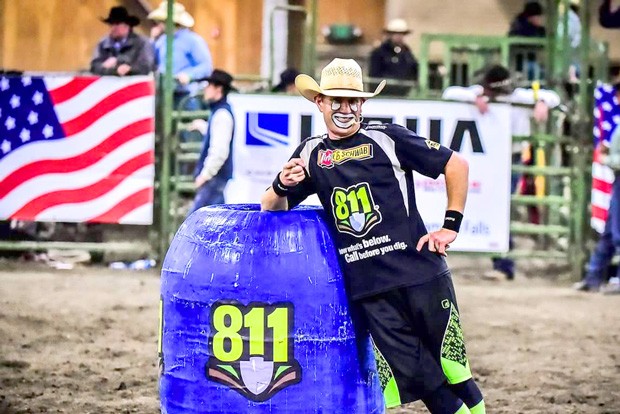 To Harrison, it doesn't matter if he's called the rodeo clown, barrelman or entertainer. He's in the arena to entertain the audience between rodeo action and to be the first line of defense to protect riders in the arena, along with the bullfighters.

"People ask me what's the most dangerous part of my job and I tell them it's the drive from rodeo to rodeo," said Harrison. "You do my job, you're going to get injured, putting your life on the line for the contestants." His list of injuries would make an ER doc twitch.

Rodeo is Harrison's way of life. Nowadays, he's able to share it with his wife, Bailey, and their combined kids, Trey, Huck, Ava and Trevor. On average, Harrison figures he works about 38 weekends a year at rodeos or other events—so having the whole family along is important to stay connected.

When the Deschutes County Fair and Rodeo called, Harrison said an emphatic 'Yes.' "You don't always get the Redmond 100th year anniversary rodeo," said Harrison. "I'm proud to be chosen and to prove to people I'm the right guy to be there."