Central Oregon's graduating class had to end their time in high school on strange terms, but they're making the best of it

This year has been weird for everyone. The way businesses operate has been, and probably will remain totally different. But there's one group of people who in particular are facing strange times: the graduating class of 2020.

Not only are many seniors leaving behind what they know, but they're taking a step in life that has become more uncertain than it already was. They'll be among the first students to be taking in-person classes and attending college post-pandemic. Things might look different and there may be additional safety measures still in place come fall.

These students will be entering into uncharted territory, leaving behind one of the most unprecedented years in recent memory. But even with a bump in the road, the class of 2020 kept that senior spirit alive and is looking ahead to the future. The Source spoke with five seniors from around Central Oregon to get their feelings on their last year of high school, what they remembered the most and where they're going next.

Up next: University of Oregon, studying business and music

Feelings on senior year: It was pretty disappointing. I played ultimate Frisbee all my years, and the biggest thing for me was that getting cut short when I thought we had a good chance of going pretty far. And also it's a bummer to not go to prom and all that stuff. Some of my friends held some things, but I wasn't around to go. But it looked fun!

Graduation party: It was mainly family, a couple of friends and stuff. We just kind of had food and hung out. It was about 15 people.

Favorite high school memory: My freshman year, for teacher appreciation week I dressed up as one of my teachers. He had one of those haircuts where there's some hair in the back but not everywhere, like the cul de sac. But I shaved my head like my teacher and showed up to class. He was jacked, it was awesome! But I did have to have my haircut like that for a while.

Up next: Studying criminal justice and forensic science at Colorado Mesa University

Feelings on senior year: It honestly feels really strange. Like going back for graduation and stuff. Seeing people but not really being able to talk to them. I feel like the seniors, we missed out on a lot of good stuff. Prom, senior pranks and stuff like that. I didn't really think there was any other way we could have done this, though.

Graduation party: We're just having a few family members and a few friends over. I get to share it with my step-brother because he's graduating too!

Favorite high school memory: I really liked playing soccer. You got to meet so many people and you always have that group to go back to. I really enjoyed that. 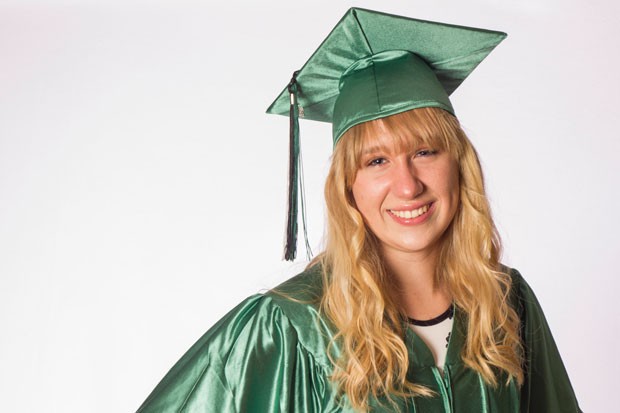 Up next: Swimming at Linfield College

Feelings on senior year: It was weird. I mean, it's something you look forward to. All your years of schooling you're looking forward to your senior year. It's the most fun! So it was a bummer. We've still had the opportunity to see people that are in our classes and stay in touch that way, so we still got to say our goodbyes to those people. It's still kind of sad to not get to say goodbye to the whole class, though.

It's been so weird. I've never spent this long out of the pool. I'm usually up at 5:30 swimming every day. But now I just sleep in.

Graduation party: I had a few family and friends over. We had a little barbecue. I might hold another one later in the year when we're more progressed. I'd love to have my family from California come out so I'll probably have a bigger party as things go on.

Favorite high school memory: I'm so invested in swim team, and I was able to complete my last season which was awesome. Being a team captain and getting to know all the kids, even the younger ones, was really cool.

Up next: Studying civil engineering at the University of Hawaii at Manoa

Feelings on senior year: It was definitely weird and it was definitely unexpected. We haven't been able to get into the pool, and for people who are planning to swim competitively in college, they aren't able to stay in shape like they normally would.

Graduation party: We went down to Pioneer Park and had some dinner and took some pictures. It was just close friends and family. I would have liked to invite more people but we had to keep it small just because of the guidelines.

Favorite high school memory: My favorite memory was at high school state two years ago. We won the meet, and after we all sat on the end of the bullpen and sang the fight song and jumped into the pool together.