She Can Brew It

The craft beer industry has evolved over the years, and imagining it as a male-only trade would be silly. Plenty of women brew beer, and Central Oregon is lucky to host a lot of that talent right here.

Tonya Cornett, 10 Barrel's brewmaster of research and development, has been a part of Bend's brewing scene since 2002. I talked to Cornett about her relationship with beer, and how she's seen the industry change over the years. 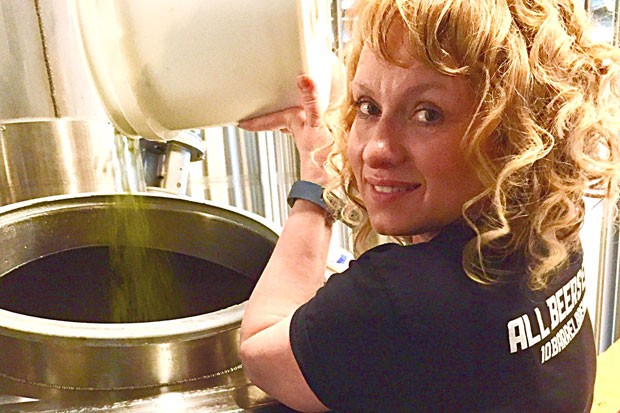 SW: Do you remember the taste of the first beer you ever brewed?

TC: When I began brewing in the mid 1990s, most breweries were focusing on English styles. As I recall my first beer was a honey brown. It was good enough that I got compliments from friends, but not remotely as good as what I was drinking in the brew pubs. Immediately I wanted to make another batch to try to make it better.

SW: Is there any lesson that has stuck with you from your time at the World Brewing Academy?

TC: When I attended the World Brewing Academy in Germany, I was exposed to lager beer styles for the first time. I gained an appreciation for German brewing traditions. They have a very definitive idea of what beer is and isn't. Because of Prohibition, our brewing history in the United States didn't evolve such staunch ideals—which ultimately led to the creativity you now see in the beer industry.

“You can’t taste if your beer was brewed by a woman so why should it matter?”—Tonya Cornett tweet this

SW: Compared to when you started out, I imagine the number of women in the industry is much greater. How has it felt to be a part of that growth and to see where the industry is at today?

TC: Honestly, when I began brewing it never crossed my mind that brewing was thought of as a man's job. It wasn't until I began going to the Craft Brewers Conference that the lack of women was apparent. For years I was featured in articles focusing on being a female in a male-dominated industry. The publicity was great in the beginning. However, after a time I found myself repeating the same answers to the same questions for article after article. When men are interviewed, the article is about their beer. It has taken more time than I expected, but I'm starting to see a decrease in focus on gender in the brewing industry. You can't taste if your beer was brewed by a woman, so why should it matter?

SW: 10 Barrel took home seven awards during this year's Oregon Beer Awards, the second-most out of a plethora of breweries in the state. How did it feel to see the entire team's work recognized in that way?

TC: The Oregon Beer Awards are unlike any other beer competition throughout the year. There are about one-third the number of categories than that of a traditional competition, which means your beer is competing against a variety of different styles. It is much more a "best in show" scenario. Only Oregon breweries are eligible, so the caliber of beer is really high. This is the second year we have performed at a high level. For my team doing well at this competition, it reinforces that the beers we are brewing are relevant and comparable to what we see in the industry.

SW: If you could sit and have a beer with any woman in history (dead or alive) who would it be and why?

TC: When I think of women who have changed the world in my lifetime, my mind goes immediately to Oprah. We could chat about the nuances of beer and life. Hopefully, she would pick one of the Crushes for her favorites list!