Shepherd's House After The Lighthouse | The Source Weekly - Bend, Oregon

Shepherd's House After The Lighthouse

Shepherd's House opened up its navigation center in June, and has been expanding services since. Next stop: Redmond

Shepherd's House opened the Lighthouse Navigation Center in July, just four months after the City of Bend approved plans to convert its overnight shelter into a full-fledged 24-hour service center. The renovated shelter has more sleeping space, a lounge area for meals and meetings and a computer lab. About 100 people can stay during the nighttime, and during the day people can walk in and get connected to local services.

The Lighthouse is the latest complement to the suite of services Shepherd's House offers. A project called the Project S.H.A.R.E. van tours around Bend with basic supplies like food, clothes and toiletries to the tent communities around town. 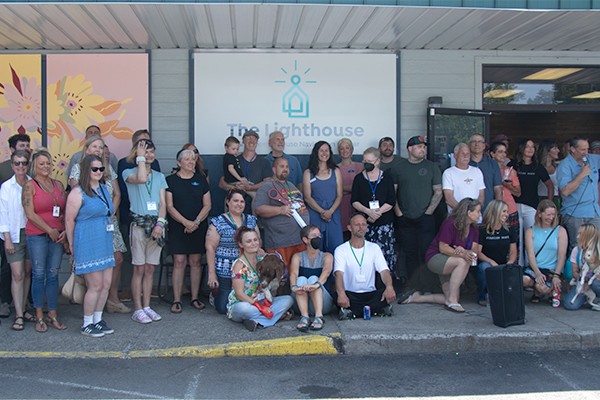 Sometimes the van is followed by the Shepherd's House shower truck, which has four stops a week at areas with nearby homeless populations. In addition to outreach, Shepherd's House also runs shelters besides the Navigation Center. On Nov. 15 Shepherd's House will open its winter warming shelter in Redmond at the Mountain View Fellowship Church. It also has higher barrier shelters where residents must stay sober while living there. Drugs and alcohol aren't allowed in the Navigation Center or warming shelter, but it accepts people who use drugs and alcohol.

"We also have basically our recovery program. It's a clean, sober living environment. We have a men's center that holds 30 people, 30 men, and that's what they do on Division Street. And we have a woman at Children's Center at this undisclosed location for safety," Mitchel said. "Unfortunately, it only takes nine women and children total going through that program because that is in a house."

Shepherd's House's has about 50 employees but it also depends on hundreds of volunteers to help out. Volunteers help around in the day-to-day operation by shuttling around the shower truck, prepping and serving meals or doling out basic goods from the Project S.H.A.R.E van. Volunteers even help with some of the more administrative tasks like soliciting donations, working on the website or writing social media content.

In the future Shepherd's House is hoping to grow its presence in Redmond. Redmond's homeless population was recorded at 127 in the 2022 Point In Time Count survey of unsheltered people.

"The idea is to kind of duplicate what we have going on and moving it to Redmond," Mitchel said. "We're hoping by next year, we could really start making way for construction and have that operational."

—This story is part of our news team's coverage of the Central Oregon Gives campaign.