Shop for a Santa Cause | The Source Weekly - Bend, Oregon

Shop for a Santa Cause

Buy an electric bike for the eco-conscious thrill-seeker and they'll probably thank you many times over as they're flying up Awbrey Butte without breaking a sweat. 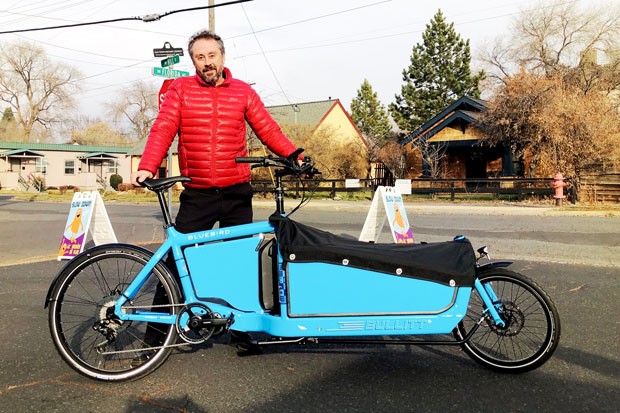 "Santa is fully on the e-bike Kool-Aid train. Kris Kringle is crushing it this month," said Sterling McCord, owner and operator of Bend Electric Bikes on NW Hill Street. "Not everyone has $950 to throw at a present—and it's hard to fit under the tree—but it's a useful present. This is something that will make your life more rich and more full for many, many years... at least 10 years."

It may be hard to tell by living in a city that's been dubbed "Bike Town, U.S.A," but sales for traditional "sweaty" bikes fell by 8% nationwide last year, while sales of electric bikes rose by 183% over the last two years, according to the NPD Retail Tracking Service.

Courtney Van Fossan, cultural agent of change at BEB, believes the trend is an indicator that both locals and newcomers to Bend are ditching their cars in favor of bike commuting. She estimates over half of the shop's customers this year bought a bike as a practical way to get around town as opposed to buying one as a toy or a piece of sporting equipment.

While there is a growing interest in bike commuting, Van Fossan believes Bend lacks the critical mass of cities like Portland, where 6.3% of the population reported bike commuting in 2017 (according to the Portland Bureau of Transportation) in contrast to Bend's 3.65% in 2016 (according to U.S. Census data published by the City of Bend).

"We're behind, but also consider where we are on earth, in the middle of the State of Oregon, not in the middle of a big metropolitan area where you have more access to infrastructure, more people to support the culture and more people riding together," Van Fossan said. "We don't have the masses now for a bigger movement, but it's coming."

“You’ll go faster, ride it more, carry heavier loads. You’ll wonder if you could hook a trailer up to it and drag your Great Dane up (NW) Troon.”—Sterling McCord, owner & operator of Bend Electric Bikes tweet this

Organizations like Bend Bikes and Commute Options (both bike advocacy nonprofits) are working to make sure connective bicycle infrastructure is a priority in the City's 20-year Transportation System Plan, Van Fossan explained.

"More and more people are coming in here and saying 'I want to be out of my car and be on my bike more because of traffic, because of health, because of the environment,'" she said. "Electric bikes are a vehicle to make that happen because they remove barriers."

E-bikes make biking accessible to people who may have been excluded in the past: people with disabilities, busy moms with kids to cart around, and people who just don't feel like they're fit enough to make a bike their primary mode of transportation, Van Fossan said. Beyond varying abilities, BEB also carries bikes designed for a range of intended uses from commuting, to riding in the dirt, to carrying cargo.

Prices range from $995 for the "Pint," an electric one-wheeled skateboard by Onewheel, to the "S-Works Turbo Levo" carbon-framed mountain bike from Specialized for $12,075. A mid-range Cruiser is about $2700, according to BEB's website.

The store has a large selection of cargo bikes designed specifically for those who need to transport heavy loads like their tools, their kids, their newspapers, or their fresh roasted coffee, McCord said. For example, Stewart Fritchman, owner of Bellatazza Coffee, recently bought a cargo bike with the goal of enjoying the open air while making most of his store deliveries.

"Cargo bikes are built to be more rugged and durable," McCord said. "You'll go faster, ride it more, carry heavier loads. You'll wonder if you could hook a trailer up to it and drag your Great Dane up (NW) Troon."

The majority of other bike stores in Bend carry at least a few electric bikes in stock, and Pedego Electric Bikes in downtown Bend has a wide selection of commuters, cruisers, cargo and mountain bikes made by Pedego, a company founded in 2008 in Newport Beach, California The Bend store is owned and operated by local Kevin Rea.