Rising rents closed the Bond Street Market. Who's next? 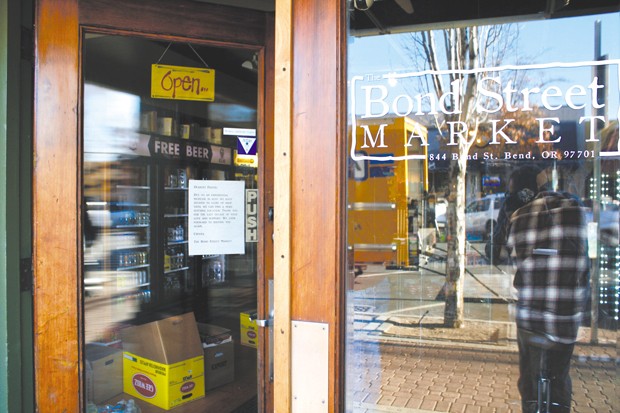 Earlier this month, Bond Street Market packed up its wares and moved out of its location at 844 NW Bond St. after seven years selling drinks, newspapers and over-the-counter medicine to downtown visitors and workers. The closure of the shop leaves downtown users having to travel to places such as the 7-Eleven on Galveston or Market of Choice on Arizona to get convenience items close to the heart of the city.

Rian Steen, who's owned Bond Street Market at two locations for going on 10 years, said the exponential increase in his rent caused him to close shop and begin the search for a different location.

Steen said his rent was going to increase 27 percent from its current level. He said the old lease had a 19 percent ceiling, but says the owner ran comparisons to the rents in nearby buildings and added square footage to the building to get out of the lease.

Steen said the building originally suited his needs, but the air conditioner didn't work great in the summer—leaving customers and employees hot and uncomfortable—and the building had other drawbacks, so he decided the increase in rent was the final straw.

"I was paying a premium price to stay in a place that's really not livable," Steen said. The Source reached out multiple times to the owner of the building, who lives in Florida, but received no response.

Steen said he's trying to find another location in the downtown area and that the community response has been almost overwhelming.

"I've lived downtown a long time," he said. "I run into people in the gym who tell me how much the market meant to them."

According to Ben Hemson, business advocate at the City of Bend, part of the reason rents are going up is that many business owners' 10-year leases are ending.

"Think back to 10 years ago. The demand is at a different magnitude to the recession," Hemson said.

Information provided by Compass Commercial Real Estate Services shows that of the 65 retail spaces of over 3,000 square feet in downtown, only 2.2 percent were vacant as of the third quarter this year. In the Old Mill, there are no vacancies.

Hemson said development of places like the Central District for more retail space could prevent rent increases from going up so quickly.

Wabi Sabi owner and City Councilor Barb Campbell said her business, too, could relocate because of rising rents.

"My lease is up in the spring and my own landlord has said she believes I'm not paying the full market value and she intends to raise the rent," Campbell said.

Campbell said she received a 20 to 25 percent increase overnight because she's under what's called a "triple net lease," or a lease where the tenant or lessee agrees to pay all real estate taxes, building insurance and maintenance in addition to normal fees including rent and utilities.

Campbell said a previous rent increase caused her to sublease some of the 3,000 feet of retail space she rents.

"Those two businesses I found, that even the sublease was more than they could afford," Campbell said. "They couldn't make it for $1,000 a month."

Campbell said Wabi Sabi's been in business for nine years—seven and a half at its current location on Wall Street across from the Tower Theatre.

Campbell said the shortage of commercial space is a consequence of the failed urban growth boundary expansion a decade ago.

"I don't know what I'm going to be able to do," she said. "I feel like I'm in the same situation as people who can't afford a home in Bend."