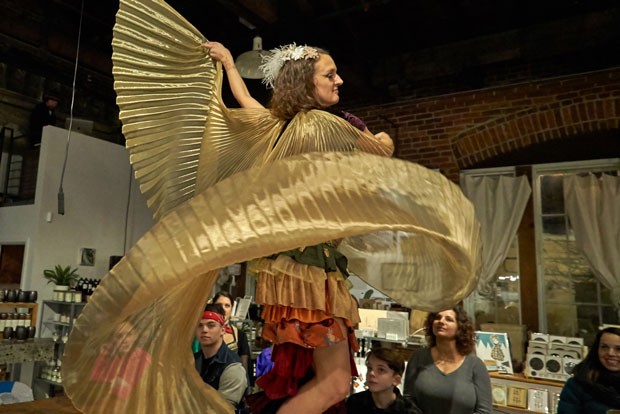 Leia Napoli was literally born into dancing. Her mother was a belly dancer and often performed while still pregnant with Napoli, continuing to perform throughout Napoli's childhood. It's no surprise, then, that Napoli continues to bring dance and movement into the community through her movement-based variety show, Loophole Sideshow.

Napoli trained in tribal belly dancing, in the past regularly performing at Joolz. She also formed Shapeshifter, a belly and fire dancing troupe. She's also joined various stages offering experiences like her belly dance to "Flight of the Bumble Bee" or the bawdy and hilarious performance with Bend Burlesque, set to the William Tell Overture, in which she wore a horse mask and little else.

"When I was younger, I would always be the first one on the dance floor. I love dancing a lot. It's what my body wants to do. It's good at it," says Napoli.

Now, Napoli is planning a show at Silver Moon Brewing, and bringing some friends with her.

The show will include local drag queen, Madam Richard Tucker, Katie Pinto with a hoop dance, a few acro-yoga teams and more.

Dance is still a family affair. Sahalie Iverson—Napoli's daughter, in the 7th grade, will perform aerial silks, accompanied by 9th grader Morgaine Stalker on electric piano. There's even a mother-daughter duet: a belly dance to a re-mix of a Baltic beat box song.

Napoli hopes Silver Moon will be a good venue to grow the show, in an effort to showcase the growing community of performers who want to share their dance and movement skills.

Says Napoli, "Bend has a lot of great performers and as we get bigger there is more room and more need for different kinds of art."