Opera Bend is bringing a joyful production to Redmond Friday, with Lucy Simon's "The Secret Garden," the story of a young English girl sent to live with relatives she never met after losing her parents to cholera in the early 1900s. The musical enjoyed over 700 performances on Broadway when it premiered in 1991, winning three Tonys and four Drama Desk awards, most notably for Outstanding Musical. The Opera Bend production continues in Madras Sunday.

Opera Bend Co-Founder and Executive Director Jason Stein and his wife, Nancy Engebretson, founded Opera Bend in 2013. "My wife and I had been singing in Colorado for a few seasons, at Emerald City Opera in Steamboat Springs. On the way back from one of those trips, we decided we could do this in Bend. I really wanted to take advantage of some of the great singers we have here, the great musicians we have here, and I felt like there was a niche for an opera company.

"Since then we've been doing two to three operas or musicals per season. We've collaborated with The Cascade Chorale, Central Oregon Mastersingers and Central Oregon Symphony. As much as we can, we work with other like-minded organizations here to produce operas, which is not an easy task. It has all the same requirements as theater, but usually a much larger cast. In 'The Secret Garden,' it isn't a huge chorus, but there are more than 30 people on the stage." 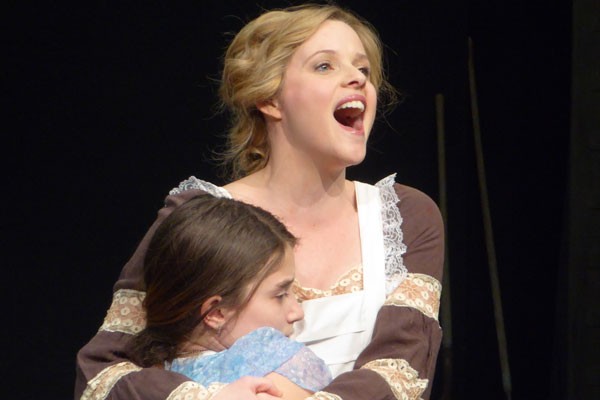 The lead role of Mary Lennox is double-cast, featuring youngsters Katey James and Emma Morton. Meanwhile, the role of Colin Craven is played alternately by Gavin Felciano and Jakob Michael. All four young people are accomplished singers and more than capable actors, as witnessed during a recent rehearsal at Central Oregon Community College. They're confident performers, expressive in manner and voice, and attentive to the timing and nuances of the production.

Stein plays the part of Archibald Craven, the widowed uncle who takes in his orphaned niece while at the same time caring for his invalid son, Colin. Stein is a powerful singer and masters the role of the detached parent, eventually transformed by the influence of his joyful young charge.

Baritone Zachary Lenox is Dr. Craven, brother to Archibald and caregiver to young Colin. Lenox brings richness and captivating expression to his role as the controlling but frustrated personal physician.

The musical differs slightly from the familiar novel by Frances Burnett and the 1993 film.

"I think the biggest difference from the book or the movie is how the folks who have already passed away are presented," Stein explains. "Like the role of Lilly, Colin's mother who died in childbirth, or the roles of Albert and Rose, Mary's parents. In the musical, they play very prominent parts, to help guide Mary through this journey she's going through. Lilly is Colin's mother, and here she is guiding Mary, her niece, who has come to live in that house, in order to help her own son and husband to deal with her loss.

"There is a little bit of confusion," Stein adds, "especially in the beginning, to kind of get who's alive and who's not," Stein adds. "I remember going through that in the Broadway show. There are also a few scenes that are complete dreams. All of a sudden, these characters are in a dream sequence, and the audience isn't really told that. But I think that's a choice the writers made, thinking that the audience will soon figure it out, so I have to trust that the writers know what they're doing. The audience has to do a little bit of work. Even if people think that it's real and then figure it out later, I think that's fine.

"From the audience perspective, I would like people to walk out thinking, 'Wow, those kids are so talented,'" Stein says. "They really are. Some of them are 11 years old. That's one of the big things I hope they will come away with."