When looking for the best all-around winter fitness sport, this might just be it

I was a little apprehensive pulling into the West Village parking lot at Mt. Bachelor for my first skate skiing lesson. I hadn't been on cross-country skis since Zima was a thing.

Following the very fit, spandex-clad people toward the entrance of the Nordic Center, I wondered exactly what I'd gotten myself into. 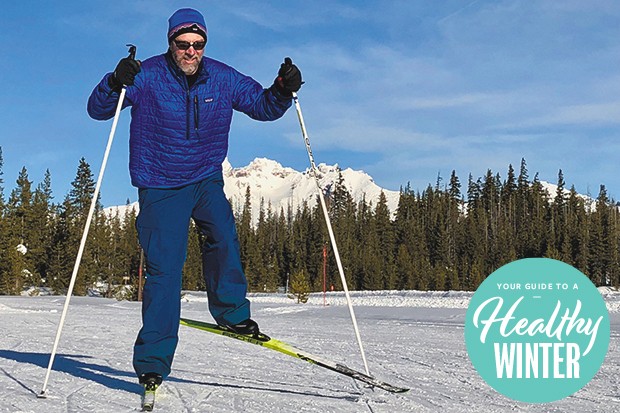 Skate skiing is like a combination of roller blading and traditional cross-country, or "classic" Nordic skiing. To gain momentum uphill, skiers make a pie with the skis and glide off the inside edge. Instructor David Lawrence had me doing drills without poles to get a feel for how big the pie needs to be in relation to the steepness of the slope. Pro tip: if you're sliding backward, it's not big enough.

Lawrence had me work on going uphill to the point that I could actually glide up the slope. We worked on placing one ski in the traditional cross-country track, then taking the other ski, pushing off the inside edge like ice skating and returning that same ski nearly behind your body by simply lifting the toes to keep from tripping over the tip of the ski.

After a few times up and down the hill, Lawrence brought in another facet: using poles—which are much longer than downhill or even classic cross-country. And you don't use one at a time either; it's always a double push. Another difference between downhill and skate is in the position of the poles. In skate skiing, the poles should hit the snow right about where your boots connect to the bindings. To get maximum push, Lawrence taught me to stand tall while planting, then go into an athletic stance with knees bent as you push the poles behind you.

For beginners, the best way to learn is to pole plant, then skate both feet and pole plant again. Seasoned veterans, and really good skiers like Lawrence, can plant their poles between skating with each leg.

After my lesson, I was free to skate around the training oval with its beautiful views of Broken Top and Tumalo Mountain, then back around the Beginner's Luck Loop to the lodge. After a few laps I was nearly exhausted, but felt great and now have another go-to winter sport.