Raw. Hop-forward. And built for pow-days. That's what compilation wintertime masterpiece Skunk Ape India Red Ale is all about. Locally crafted by hometown hero Boneyard Beer and the Pacific Northwest's pinnacle of snowboard companies, Lib Tech, out of Washington, the frothy thriller was born in Bend in 2011. To celebrate Skunk Ape's 10th anniversary, this is the little-known tale of its namesake, told by the legends that concocted it all.

"This beer stands for everything Boneyard loves: hops, flavor and wicked good snowboards," explains Boneyard Co-owner and Master Brewer Tony Lawrence. Skunk Ape was conceived when Lawrence, along with Trevor Philips and Kyle Phillips from Lib Tech teamed up to, "bring the craft beer and snowboard worlds together to create a powder-centric beer to quench any shredder's thirst," says Lawrence. 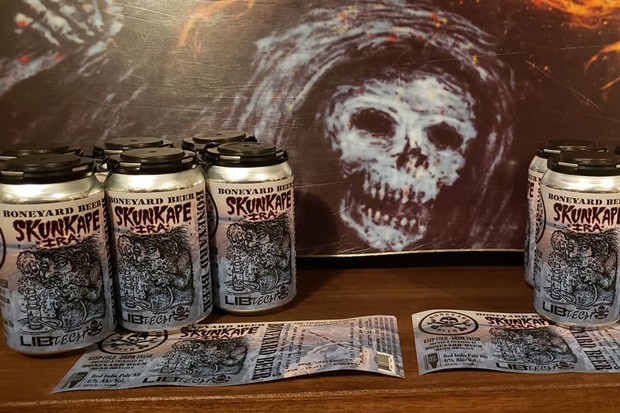 After becoming acquainted as brewers in the early days of Deschutes Brewery, Kyle Phillips and Lawrence remained in touch.

"Years later Kyle and I were both working at Lib Tech," says Trevor Philips, "and were trading Skunk Ape snowboards for Boneyard Beer." Cue the collab. "We all rode Skunk Apes and so we landed on that name [for the beer]."

Digging a little deeper, Lawrence reveals, "The strange thing is, I'm not really a fan of amber/red ales. They're fine but can be a little sweet and malty without much hops. IRAs are a rare style to find and challenging to pull off. IRAs are sorta bigger than an India Pale Ale with mouthfeel, color and rich caramel malt notes."

Lawrence draws a parallel with Lib Tech signature boards, saying, Skunk Ape snowboards by Lib Tech, "are bigger and wider than typical dimensions. In this way, Skunk Ape Boards are challenging and rare as well.... So the beer needed to be of those same qualities. Rare, big and elusive." Not unlike the atmospheric, alchemical magic of the perfect pow storm. Or, like the can graphic shows, a rare, hairy, niche, snow-carving version of Yeti, BigFoot or the Abominable Snowman.

Speaking of graphics: "Lib Tech Artist and OG Skunk Ape, Quincy Quigg was totally down to do the Keg Froth Art as he has on many iterations of Skunk Ape boards," says Trevor Philips.

“We have always had freedom to play with products like hop oils and extracts and used different applications with this beer to find something interesting that tasted good.”—Tony Lawrence tweet this

"We really felt like Quincy Quigg's artwork fit seamlessly in with Boneyard's graphics," Lawrence echoed. One of Boneyard's hallmarks in the industry (besides RPM IPA) is utilizing eye-catching, detailed classic tattoo style art in its branding and logos—a successful digression from what some consider stale rank-and-file beer labels.

Trevor Philips agrees that Skunk Ape snowboards have a certain je ne sais quoi for the grenade rider. "Skunk Apes are the best larger gentlemen's power freestyle stick on the planet. On either rail, your toes [and/or heels] won't drag, but your knuckles might."

In terms of ingredients and chemistry, Skunk Ape has always been an experimental beer for Boneyard. Lawrence says, "At the time we were thinking up Skunk Ape, IRAs seemed to be a newer style and we thought we'd take a crack at making one. We have always had freedom to play with products like hop oils and extracts and used different applications with this beer to find something interesting that tasted good." 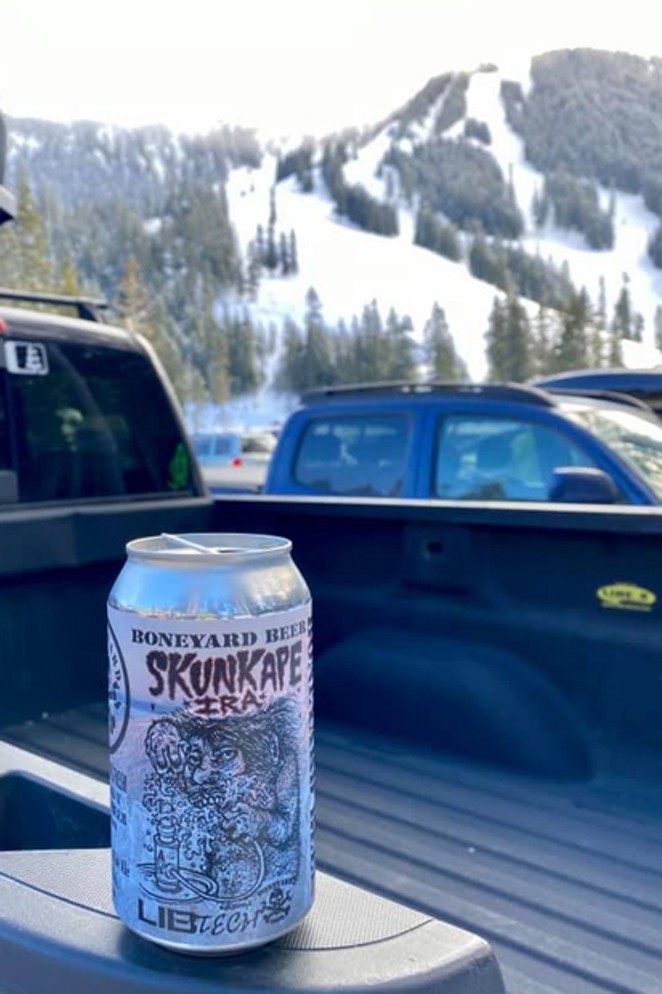 "Tony has continued to tweak the IRA recipe each season," notes Trevor Philips. "Now, with the canning of Skunk Ape IRA, there have been more after shred sightings of the elusive Skunk Ape IRA..." So keep an eye-out and try to catch one if you can!

With deep roots in the early days of Oregon and Washington's knuckle-dragging culture and the evolving sport of snowboarding, Skunk Ape is more than a beer. It's an offering paying homage to the Gods of Valhalla, it's a gratitude for all the good jibs and pow slashes during seasons of yore, it's a special drink you share with a slaydie-friend after a romantic day of big mountain riding. It's a throw-back and revitalizing flare for an OG pow-surfing renaissance. A shepherding of the fire and perhaps a passing of the torch. What will the new wave of Bachelor boarding brats do with all this history? Cherish it—we hope.

"This dank, hop-forward India Red Ale will thrill any taste-buds from the beginner slopes to the cornice. 6% ABV, 40 IBUs and is available in 5.2g, 7.25g and 50L kegs and now cans. Boneyard's Skunk Ape will stick around until the snow melts."