Smooth and jammy, this classic apple spread tastes like fall and is easy to make in a Crock-Pot

‘Tis the season…for apples! I’m partial to this fruit for a variety of reasons. Apples are pretty, they’re portable, they taste good and they’re good for you with 5 grams of fiber in a single apple. I also like their versatility. Raw, baked in a pie, sliced with cheese, spread with peanut butter, cooked into applesauce, dipped in caramel, it’s hard to believe this one fruit can show up in so many different ways. 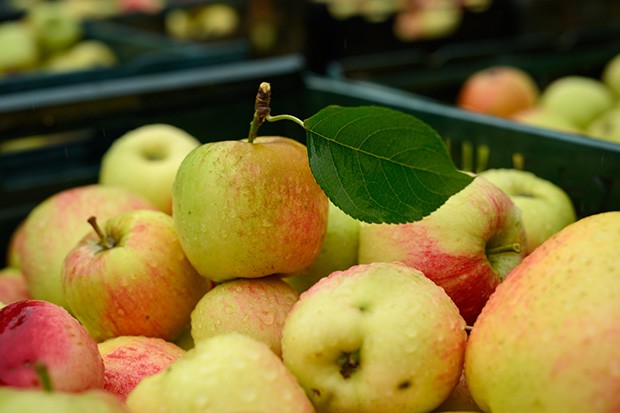 The apple tree originated in an area between the Caspian and the Black seas but these days 7,500 varieties of apples are grown around the world and 2,500 varieties are grown in the United States alone. Apples are grown in all 50 states and grown commercially in 36 states. Washington, our neighbor to the north, and New York are the top apple-producing states. The pilgrims planted the first apple trees in the U.S. in the Massachusetts Bay Colony. And here’s another fun fact: the crabapple is the only apple native to North America.


Back to the versatility of the apple; there are so many things you can do with apples from baking pies and crisps to using them in savory dishes (they roast well with poultry and make a great accompaniment to pork). You can cook them down into applesauce or press them into cider. I’ve chosen to make a huge batch of apple butter with my recent haul.

The roots of turning apples into apple butter go way back to Europe and the Middle Ages. Making apple butter was popular in colonial America through the 1800s and is a hallmark of Appalachian and Southern cooking to this day.

Apple butter cooks longer than applesauce so it ends up having a jam-like consistency. The sweet, smooth spread is traditionally served with hot biscuits but it’s also good on toast, pancakes or waffles. It can also be served as a condiment with roasted chicken or on pork chops or tenderloin.

The roots of turning apples into apple butter go way back to Europe and the Middle Ages. Making apple butter was popular in colonial America through the 1800s and is a hallmark of Appalachian and Southern cooking to this day. tweet this

Softer varieties of apples work well for apple butter as they cook down faster. Think Golden Delicious, McIntosh, Jonagold or Fuji. Granny Smith and Honeycrisp are good too though. Any apples you have on hand will work so don’t be too fussy about which variety to use for this simple recipe.


This recipe calls for the finished product to be cooled and then refrigerated or frozen. You could properly can the apple butter to preserve it so that it could be left on the shelf but if you use this recipe the way it is written, the apple butter must be kept cold to keep it safe.

Toss the peeled, cored and sliced apples with ½ of the white sugar and ½ of the brown sugar. Place the apples and sugar in a slow cooker and cook on high for 6 hours or on low for 8 hours. Stir in the remainder of both sugars along with the spices and salt and cook on low for another 4 hours or until the apples are extremely soft, stirring occasionally. Once the apples are completely tender and dark brown, add vanilla.

Puree the apple mixture with an immersion blender or carefully remove from slow cooker and blend in a regular blender, a bit at a time, until smooth. Return to slow cooker and cook for another 1 to 2 hours to thicken.

Spoon thickened apple butter into jars or containers. Let cool completely. Store in refrigerator for up to one month. You can also freeze for up to six months.

Serve with hot biscuits, toast, pancakes or waffles. Use as a spread on sandwiches, stir into oatmeal or dollop onto roasted pork or chicken.