George Clinton may have recently announced his retirement, but the 78-year-old funk icon shows no signs of slowing down. The multi-tasking musical mastermind not only released "Medicaid Fraud Dogg" last year, the first Parliament studio outing since 1980's "Trombipulation," but also just returned from a recent tour with protégés The Red Hot Chili Peppers, and received a Grammy Lifetime Achievement Award in May. 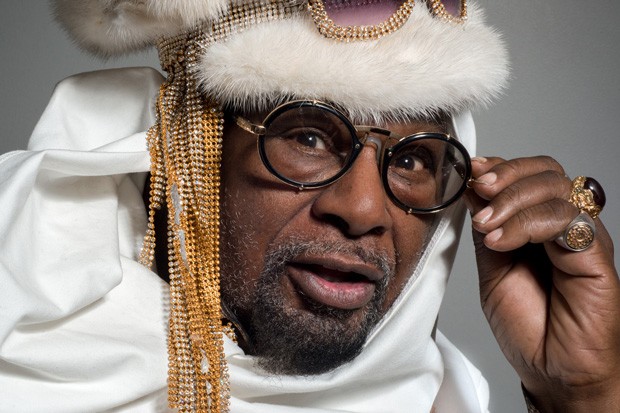 And while he's leading the charge on the concert trail for the 24-odd musicians that take the stage under the P-Funk banner, the New Jersey native is having second thoughts about stepping back.

"The group is so hot right now. I want to make sure that they [continue down this path]. I may end up staying one more year. But I'll know by November," Clinton said in a recent phone interview.

The oversized influence of George Clinton's musical legacy can't be emphasized enough. Aside from laying the bedrock for funk, alongside James Brown and Sly Stone, the one two-punch of Parliament, Funkadelic, the Brides of Bootzilla, Bootsy Collins and all the other musical branches that emerged from the Clinton musical tree, provided the roots for hip-hop as well. And while it would be easy for Clinton to stay in nostalgia-act mode, the septuagenarian funkateer and his son, Tracey Lewis, used "Fraud Dogg" to delve into Atlanta's trap music scene. It's something concert-goers can expect to experience firsthand this Friday at Oregon Spirit Distillers.

"Oh man, it's like yesteryear and today at the same time. It's the P-Funk vibe evolved throughout the times that we've been around, including the hip-hop version of it. You've got the sound of Atlanta meets Led Zeppelin, you know what I'm sayin'?," he said with a laugh. "It's the new trap music and we electrified it. It's such a brand-new vibe that we took advantage of it."

While Clinton's earliest musical memory is of his 20-something mother and aunt dancing to Louis Jordan's "Caledonia" and "Saturday Night Fish Fry" when he was only 3 or 4, the need to hustle and feed this appetite of musical creativity can be traced back to seventh grade and his job sweeping up at a music store. Excess records by Elvis Presley and other artists were consigned to the rubbish bin, where the entrepreneurial Clinton would snatch them up and sell them at school for 12 to 15 cents a pop.

But it was Frankie Lymon, soprano lead singer of The Teenagers, and future Motown legend Smokey Robinson who inspired Clinton to dive head-long into the business of music.

"I was in the record business in grade school and I started the group around the same time. I started the Parliaments because of Frankie Lymon. He made me want to have a group right away. But what made me really want to go all the way was Smokey Robinson," Clinton explained. "When Motown popped up, he was doing it for The Miracles and then started working with The Temptations and The Marvelettes. That's when I realized that you needed to have a lot of [creative] outlets for all the different styles of music you want to do."

The perspective Clinton has gained over a lifetime of making music has particularly resonated for him during major industry events, be it the group's 1997 induction into the Rock & Roll Hall of Fame or receiving that recent Grammy Lifetime Achievement Award.

"That Rock & Roll Hall of Fame induction was a lot of fun. You got to see a lot of people you hadn't seen in years. We hadn't seen the Jacksons since they were kids," he said. "You're back there reminiscing about 50 years ago. I did it again when we got that Lifetime Achievement Award. Dionne [Warwick] and I were back in East Orange, New Jersey, at the same time when she first started. And we talked about Reverend Warwick and the Drinkard Singers before Cissy Houston and them all. You see and talk about all of that and you see that you survived."