"Phoenix, Oregon" captures the beauty in the mundane

Bobby Hoffman has a bad haircut and a worse mustache. He wakes up every morning in a classic Airstream trailer surrounded by empty boxes of Pop Tarts. He vapes and jogs simultaneously and is condescended to by just about everyone he meets, including his festering prick of a boss at a terrible Italian restaurant where he bartends with his best friend Carlos, in the tiny town they both grew up in: Phoenix, Oregon. 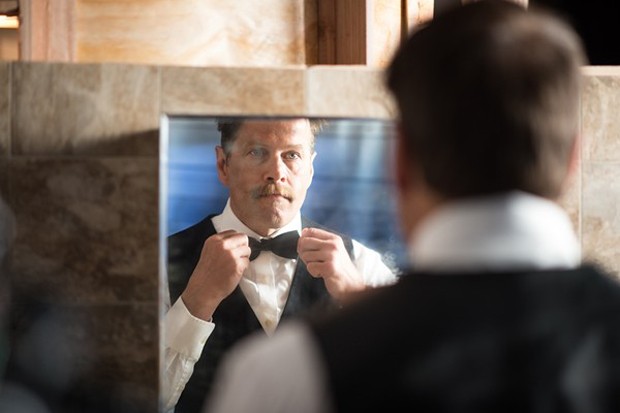 I've lived in Oregon most of my life and had never heard of Phoenix. It's located 3 miles southeast of Medford with a population of less than 5,000 people content to live in the shadow of the fourth-largest metropolitan area in Oregon. There's a cute downtown and a lovely sense of community—both of which Bobby would be happy to avoid, as he mostly just wants to drink alone and work on the autobiographical graphic novel he's been failing to finish for years.

The film "Phoenix, Oregon" is a lovely and well-observed drama filled with moments of such startling clarity that at times absolutely took my breath away. Writer/Director Gary Lundgren loves this town and the people who live there. He never goes for a mean-spirited joke, instead revealing himself foremost as a humanist, charting the pathos-driven absurdity that make up our daily lives.

"For some reason I gravitate towards the bittersweet and love trying to get that on screen," says Lundgren. "The first films I really loved growing up were films like 'Harold and Maude,' 'Five Easy Pieces,' 'The 400 Blows' and 'The Graduate' — melancholy stories that are still hopeful and funny. And I love '70s cinema—the pacing—how the storytelling would unfold and take its time. And I also love misfit characters who are struggling to achieve something—even if it's just personal happiness or survival."

Veteran character actors James Le Gros (as Bobby) and Jesse Borrego (as Carlos) are given the best roles of their career here, with a heartbreaking Le Gros carrying the film effortlessly and Borrego radiating such warmth, joy and kindness that his performance is genuinely unforgettable. I didn't want my time with these characters to end, and it's amazing how little time the actors were able to spend living with them as well.

"When you're making an independent film, you have to shoot very fast," says Lundgren. "This production was only 20 days, so there wasn't a lot of time to play around very much. You have to know the shot, know the moment, the desired effect and then execute each beat as well as possible as a team before moving on to the next one."

The future of "Phoenix, Oregon" deserves to be a bright one. "The Ashland Independent Film Festival gave us an amazing world premiere right as we finished the film in April," explains Lundgren. "We are playing several more film festivals across the country as invitations pop up, but mainly we're doing a traditional indie film release, partnering with booking agents, theater owners and theater chains. Coming Attractions is putting our film in 10 Oregon cities. Our producers are doing a great job booking the film. We believe in the theatrical experience and that there are enough people who want to see an indie film like this coming through town with the filmmakers in tow. Turning your phone off and watching a movie in the dark with your community is becoming a lost art that we want to make happen for this movie. But eventually a digital release will follow probably later this year."

"Phoenix, Oregon" deserves to be seen by as many people as possible. The film walks a gorgeous line between pathos and comedy, proving Lundgren to be a master of tone and discovering the grace notes that make up even the most mundane moments of our lives. Lundgren's script has more to say about depression, anxiety, art, friendship and love than any dozen movies I've seen in the theater this year. As an indie film, it's not just a potent reminder of why smaller movies with unheard voices are important—but also that a big budget is wholly unnecessary when sharing truth and beauty with an audience.