Smoke is in the Air | Local News | Bend | The Source Weekly - Bend, Oregon

Smoke is in the Air

Bend-Prineville air quality ranked No. 22 for the most polluted cities for short-term particle pollution

Even though Central Oregon got hit by a late snowstorm this winter, information from the National Interagency Fire Center says normal significant wildfire potential is expected during this year's fire season, which typically runs from May to August. 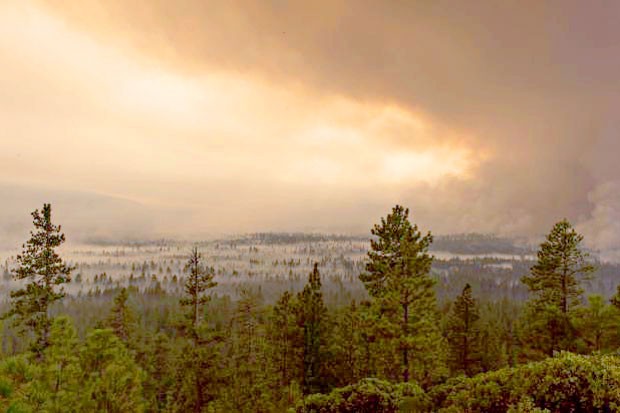 According to the NIFC, outlooks through spring and summer continue to indicate warmer-than-average conditions for the region. Long-range outlooks suggest fire danger will rise to be above average during the summer.

And where there's fire, there's smoke.

The American Lung Association ranked Bend-Prineville this year as No.22 in its "People at Risk in 25 U.S. Cities Most Polluted by Short-Term Particle Pollution."

According to Laura Gleim, public affairs specialist for the Oregon Department of Environmental Quality's Eastern Region, although the ALA's report mentions Bend, the report only uses data from an air monitor in Prineville.

Gleim said because of Prineville's location, sitting in a "bowl," the city more easily captures and retains woodstove smoke during the winter, naturally leading to worse air quality when people are burning their stoves. Bend and the rest of Deschutes County have more open geography, Gleim said, and don't retain as much smoke in the winter.

During wildfire season, however, it can be a different story. If the fires are burning in the Cascades, Bend can have worse air quality than Prineville. And, Gleim said, wildfires are by far the biggest source of air pollution in the Bend area.

Gleim and the ALA said wildfires have been increasing across the Western United States in the last decade, and are expected to become even more frequent. According to the ALA, the Bend-Prineville area experienced nearly three times as many unhealthy particle days in 2018, in comparison to its 2017 report. The ALA said many of the spikes were directly linked to wildfires.

According to a chart from the Oregon DEQ, the agency started monitoring in air quality in 1989. Before 2017, there were only 11 days total in Bend with unhealthy air quality caused by wildfire.

Gleim said that outside of the smoke from wildfires and some from woodburning stoves, the air quality in Bend is typically pretty good.

Some years in the spring, the forests around Bend are burned by managing agencies to keep the threat of wildfires down. Gleim said that the prescribed burns do contribute to some air pollution, but they're relatively low in comparison to a full-fledged wildfire—and those burns help create healthier forests and reduce the severity of wildfires.