Sneeze and Thank You

Seasonal allergies? Spoiler alert: the solution could be in your gut, a local healer says

“Have you ever sneezed while wearing a mask?” asked Tom Thurman, a server at McKay Cottage, who just recently returned to work. “It isn’t very pleasant. I understand wearing a mask at work and it really isn’t a big deal, but combine mandatory mask-wearing with the world’s worst allergy season and you’ve got a recipe for disaster.”

An atypically mild winter made for one of the worst allergy seasons Central Oregon has seen in years, according to the Oregon Allergy Associates. Juniper pollen has been ravaging sinuses since early April, and an unwelcome dusting of pine pollen now covers many exposed surfaced.

Central Oregonians have been popping Claritin like candy in an attempt to alleviate symptoms. For some, like sniffling, stuffed-up Thurman, nothing seems to do the trick. Most know a handful of time-worn holistic remedies (local honey, Neti Pots, acupuncture) but when things get as bad as they currently are, no amount of Butterbur will effectively stop the sneezing.


Joshua Phillips, naturopathic physician, clinic director and founder of Hawthorn Healing Arts Center, suggested that those looking for a lasting cure for seasonal allergies may want to look a little deeper—literally. 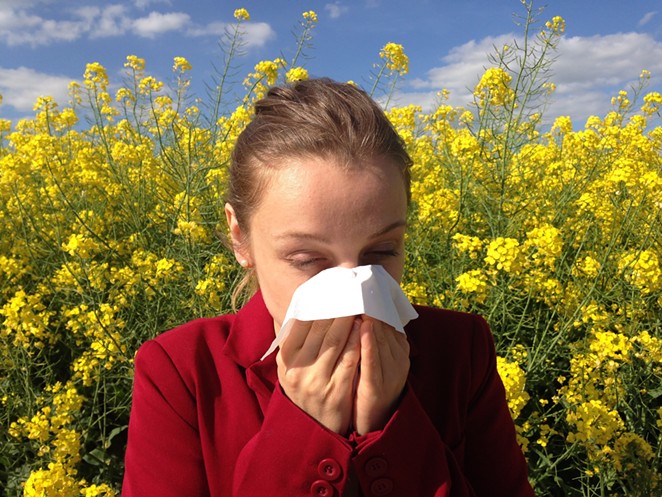 “This has been a pretty high pollen year, there’s pollen everywhere. First we got hit by Juniper, then by pine and now we’re getting hit by grass pollen,” he said.

According to the Oregon Seed Council, grass seed is grown on approximately 400,000 acres of land statewide, and the industry collectively produces over 600 million pounds of grass seed every year. Central Oregonians might shake their fists at the offensive yellow powder that blankets their cars and driveways, but Phillips confirmed that blooming grass is now the main source of local allergy woes. “We’re just starting to touch on grass pollen season,” he explained.


That’s all fine and well, but what do we do about it?


“Staying true to the credo of naturopathic medicine, I go more into depth with folks. Of course, the short answer is ‘take antihistamines.’ This is a well-known approach to mitigate symptoms. There are multiple natural products that can be used to treat symptoms, but exploring underlying causes is the real key.”

Phillips explained that in the majority of cases, the underlying issue is naught more than a “leaky gut.”

"We take medications to make the symptoms go away, but they will keep coming back unless we determine the underlying factors.” - Joshua Phillips tweet this

“People with existing inflammation will be far more prone to seasonal allergies,” he explained. “Those with inflamed digestive tracts and unhealthy guts will find that their immune systems are unable to combat seasonal allergies; if they aren’t taking care of themselves, the immune system will be more hyper-reactive. The majority of the immune system resides in the gut; over 70% of the lymphatic tissue. If you’re eating a food that your body doesn’t agree with, it will lead to chronic inflammation in the gut, meaning that seasonal environmental allergies will be far worse. It makes sense: the body will react violently to pollen when trying to simultaneously deal with another allergy. Treating allergies is about so much more than treating the histamine response. That’s really just the tip of the iceberg.”


The long-time naturopathic physician explained that there are several effective ways to combat digestive issues and in turn, alleviate seasonal allergies.

“Bioflavonoids can be really helpful in calming down histamine responses,” he said. “I like a product called Ala-Hist, which works by stabilizing cells within the body. This can also be helpful in the moment, in the midst of an allergy attack. Probiotic therapy is hugely beneficial. Note that not all probiotics are created equal! Don’t just pick the cheapest one off the shelf at the health food store. Find a reputable brand. Vitamin D is an effective vitamin. Even when it comes to allergies, it’s important to take a philosophical approach to medicine. The body is out of balance somehow, and symptoms are the correct reaction for the body to have. We take medications to make the symptoms go away, but they will keep coming back unless we determine the underlying factors.”