Santiam Pass, named for the Kalapuya people who lived along the Santiam River long before emigrants and pioneers entered the region, is a relatively low pass on the Cascade crest which connects the Willamette Valley to Central Oregon. The 4,816-foot-high summit at Santiam Pass may be wanting for elevation, but the area offers a wealth of winter trails for snowshoers, snowmobilers and Nordic skiers, spiced with a taste of history.

Just west of the pass sits Hoodoo Ski Area with over 800 acres of terrain, five lifts and a Nordic ski center with over 15 miles of trails for beginners and advanced skiers. Grooming of the Nordic trails happens on weekends and holiday Mondays, but on Tuesdays and Thursdays (Hoodoo is closed on Wednesdays) the ungroomed trails are open for free. One of the easier trails, the Hogg Meadow Loop, gives a nod to the one-time Confederate Navy Captain Thomas Egenton Hogg (as in Captain Jack Sparrow – Hogg was also a pirate) who, after getting out of a Union prison, became a railroad promoter and businessman. Hogg Rock, visible on the north side of Highway 20, sits above the Santiam Pass Ski Lodge and is a tuya, or a volcano that intruded into a glacier that covered the area during the last Ice Age.

Similar to Hogg Rock is Hayrick Butte, the massive block of volcanic rock that dominates the skyline just east of the Hoodoo Ski Area. Another tuya, Hayrick offers an unmarked route that contours around the base of the 5,522-foot-high block of basalt with a 3.6-mile loop to challenge snowshoers. Starting points for this loop adventure begin at either Hoodoo or over at the nearby Ray Benson Sno-Park.

Back in the 1970s, Ray Benson, a double amputee from Salem and owner of Benson's Automatic Transmission Specialists, formed the Mt. Jefferson Snowmobile Club with some friends. Though he lost his legs to diabetes, Benson loved to snowmobile and often advocated for snowmobile access into the backcountry. Though he died in 1976, a year before the Oregon Sno-Park program began, the club and U.S. Forest Service decided to name the newly-created Ray Benson Sno-Park in his honor.

A hub for the area, the huge sno-park has plenty of parking for snowmobilers, skiers and snowshoers who strike out in all directions on trails that explore this winter wonderland. The Nordic ski and snowshoe trails are shared-use; there aren't any dedicated snowshoe trails here. Dogs on leash are also permitted.

The North Loop begins from the northeast corner of the sno-park and leads into an area that burned during the 2003 B&B fire. Although patches of green forest contrast to the silvery snags along the route, the fire opened up the views toward Hayrick and Hoodoo buttes, Mount Washington, Three Fingered Jack and Black Butte to the east. A good destination along this trail is the North Blowout Shelter, named for the area's eruption or "blowout" of cinders. The Willamette Chapter of the Oregon Nordic Club stocks firewood at the shelter which offers an ideal lunch spot or a chance to get out of the weather. The 4.0-mile North Loop can also be extended into longer outings, from 6 to 8 miles, if shoers or skiers follow either the Two Buttes Cutoff Trail or the Circle Lake Trail. 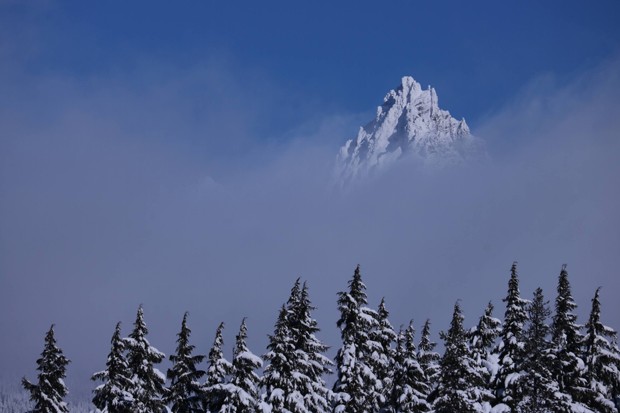 The roughly 6.2-mile South Loop trail begins from the southwest corner of the sno-park and strikes out along an old road that parallels the Big Lake Road. Eventually, the trail turns east toward Brandenburg Butte. Don't be surprised if you hear a constant drone of snowmobiles along the Big Lake Road, as this route connects snowmobilers to other nearby sno-parks.

The trail traverses up and around Brandenburg Butte, an old cinder cone named for John Brandenburg, one of the early Willamette Valley settlers who helped pioneer the Santiam Wagon Road route from the valley up to Santiam Pass. Though partially used by emigrants, this trail was designed more for valley settlers to move livestock and goods into central and eastern Oregon. The Brandenburg Shelter sits on the north side of the butte and also offers winter travelers a respite from the weather. The collection of cans in the shelter's recycling bin indicates that snowmobilers also have access to this haven. The return route to the sno-park follows either the South Loop or Claypool Buttes trails.

Before heading out to enjoy the winter trails around Santiam Pass, call for the Hoodoo snow report at 541-822-3337 to get the daily update or check ODOT's trip check cams for a visual snapshot of road conditions. Happy trails!