So Long and Hanks For all the Finch | Film | Bend | The Source Weekly - Bend, Oregon

So Long and Hanks For all the Finch

"Finch" is a heartwarming sci-fi parable

We now live in a world where there are so many streaming services that even giant-ass blockbusters that a few years ago would be taking up 10 screens at the local multiplex are now unceremoniously dumped online with no fanfare. Cinema is now mostly just a never-ending trickle of content across a dozen or so apps that we eventually might stumble across at midnight on a Tuesday when our cat jumps on our face while we're deep in a dream about Tom Hanks being our dad.

Sure, maybe that's too specific and maybe I'm the only person who dreams about Tom Hanks teaching me to ride a bike and toss a ball around the backyard, but the point is I woke up from a deep sleep and decided to watch "Finch." It's the brand-new Tom Hanks flick that should have been in theaters across the world but instead ended up on AppleTV+, the streaming service people accidentally discover while exploring their iPhones or when they're trying to figure out where to watch "Ted Lasso." 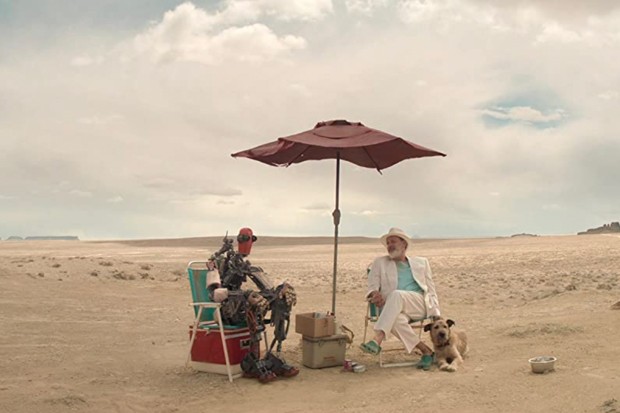 "Finch" is a post-apocalyptic heart warmer, which I wasn't aware was a thing that existed, but in the time of COVID and, well, everything, it was extremely refreshing to see a movie set in the darkest timeline focused more on hope and humanity than weird CGI monsters and explosions. Tom Hanks plays Finch Weinberg, an engineer who lives in an underground lab in St. Louis a decade after a solar flare destroyed the ozone layer, turning the world into a dusty, 150-degree wasteland.

The only things keeping Finch company are his beloved dog Goodyear and a helper robot with a grabber and wheels named Dewey. Sadly, Finch is slowly succumbing to radiation poisoning and knows it, so his main concern with the future is single-fold: to make sure Goodyear will be taken care of once he's gone. So Finch builds a humanoid robot filled with encyclopedic knowledge that will learn and grow as it gets older. To take care of his doggo. My heart.

When a massive storm starts heading for St. Louis, Finch makes the choice to go on a road trip in his Winnebago to San Francisco with Goodyear, Dewey and his newly built robot (who names himself Jeff). That's the movie: Tom Hanks, a dog and a couple of robots traveling the post-apocalyptic landscape to try to get to the Golden Gate Bridge. Even though there's a ton of incident and drama, it never becomes overwhelming and instead becomes something almost calm and meditative.

"Finch" is big and cheesy and warm-hearted, and Tom Hanks carries the movie just as you imagine he would, but it's his relationship with Jeff (played by the always brilliant Caleb Landry Jones) that makes the film so memorable. Jeff is hilarious and weird and partly broken because Finch wasn't able to upload all knowledge to the robot before they had to leave, so Jeff is always inquisitive and mischievous and dorky. Jeff allows Finch to be a father at the end of the world.

The movie isn't perfect. It edges too far into corny a few times, but I found that almost refreshing in a post-apocalyptic movie. That genre never strays too far outside of bleak and depressingly topical, so it was nice to see a movie of its kind that felt more like a fable or a flick you show the kids at Christmas. "Finch" just wants to make you feel all the feelings, and sometimes that is an absolutely beautiful thing when it's done without manipulation or cynicism.

Edging into the holiday season, I shouldn't want to keep Tom Hanks just as my own personal dad. I'm willing to share. He can belong to all of us...just as long as he still teaches me how to ride a bike.