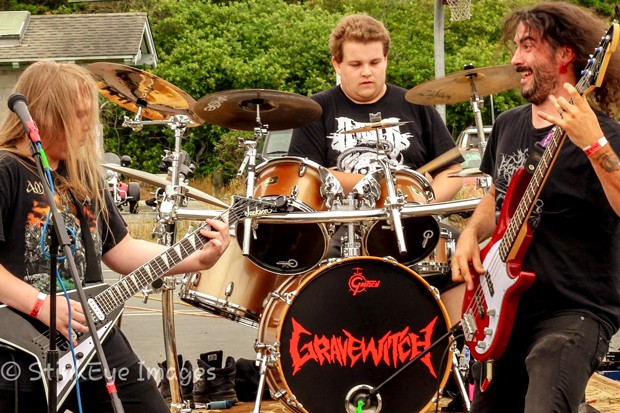 Bend Roots Revival truly has something for everyone, with musicians from nearly every genre represented. Case in point: Local band Gravewitch, representing the metal scene for the second year in a row. I sat down with the rockers to get their take on being the only metal band on the festival roster.

Chris Fleming and Andrew Ingraham, the two co-founding members, started the band in 2013 when they were still in high school. The two had been best friends for years and wanted to be in a band together. Ingraham's father started teaching him to play the drums at age 5, but he didn't get serious about it until age 12. Fleming taught himself how to play guitar at age 14.

"The things I love about metal include the blistering speeds of the music, the creativity behind the making of a really stand-out guitar riff, the dedication seen by all metal musicians and the talent that it takes to create such an aggressive music form," Fleming says.

Both members love that music lets them express themselves creatively, and that songs are an endless art form that you can write and perform in unlimited ways.

"The things I love most about metal would be the creativity, raw emotion, the mind-blowing technique and abilities from metal musicians, and the driving force behind the drumming," Ingraham says.

For the past two years, Gravewitch has been the only metal band to perform at the annual Bend Roots Revival music festival. Word on the street is their performance last year rocked. This year, they're looking forward to being on a different stage and a different festival location. They'll also be playing the festival with a full band lineup, having recently added Brandon Self on bass.

"We really enjoy being a part of this event because we are opening people up to a new and energetic live experience as well as metal music," Ingraham and Fleming agree.

The members of Gravewitch want people to know that coming out to a metal show is a great time, and there are usually quite a few shows going on every month—most at either the 3rd Street Pub or the Domino Room.

"If we were talking to someone about coming out to a show, we would tell them that they may need ear plugs. And they are in for a really great time. No matter who you are, all are welcome," Fleming and Ingraham say.