Some Want Studies About Managed Camps. The Proposed Camp off 27th Will Be That Study. | Editorial | Bend | The Source Weekly - Bend, Oregon

Some Want Studies About Managed Camps. The Proposed Camp off 27th Will Be That Study.

Last week, the Bend City Council approved Phase 1 for funding a managed camp proposed to be built near 27th Street and Bear Creek Road on Bend’s east side. Central Oregon Villages, the nonprofit launched by former Bend police chief Jim Porter, aims to place some 20 small and temporary structures there to house currently unhoused women and children. The City Council’s approval of Phase 1 allocates $45,300 to allow Central Oregon Villages to move forward with its planning and community outreach on the project. Later, COV can file an application with the City to formally move forward with the project, with the plan tentatively being that the City will approve the use of some $1.5 million in American Rescue Plan Act funds to operate the facility. 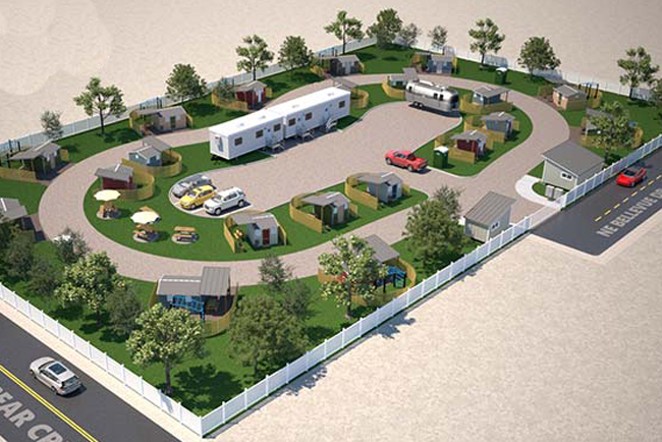 With so much community conversation happening around what should be done about the houseless population in Bend and Central Oregon, a lot is riding on this effort. As Porter put it, “We have to get this right.” We agree.

By way of Central Oregon Villages, this is Bend’s opportunity to see that a managed camp, with stipulations around sobriety, cleanliness and conduct, is a far better option than continuing to allow unmanaged camps to proliferate around the margins of the city. Where an unmanaged camp might lack sanitation facilities, water or a place to cook, a managed camp provides the basics that means people are not setting fires that can get out of control, or deciding to go to the bathroom anywhere they can. Further, because this proposed camp is on private land—on the property of the Desert Streams Church—people operating the camp have more opportunity to enforce rules around things like public camping.

While there’s a lot riding on this effort, and not all has been decided, both Central Oregon Villages and its leasor should be commended for their efforts thus far. Desert Streams Church has demonstrated what faith communities can do, and how they can be part of a solution.

Central Oregon Villages, meanwhile, was astute in pursuing a lease for a piece of private property instead of trying to use public land. Where federal court rulings such as Martin v. Boise restrict public entities from removing people camping on public land, the same is not true for private land. When conversations emerged about siting a managed camp on City-owned property near Bend Senior High School and Bear Creek Elementary, many local people were loudly opposed—at least in part due to the possibility of having other people who do not live in the camp hanging around, and there being no recourse to remove them. With the private-land siting of this proposed village, cops can, in theory, ask people to leave if needed.

When it comes to the growing houselessness issue in Central Oregon, it seems many have an opinion. But when it comes to those willing to step up and find solutions, just one group stood up and submitted a proposal to the City’s Request for Proposals: Central Oregon Villages. This is the community’s chance to see how that effort plays out, and whether our tax dollars are better spent offering supportive communities for those experiencing homelessnessversus the current conundrum.