Some Want You to Believe Protesters are "Outsiders." Don't Believe Them. | Editorial | Bend | The Source Weekly - Bend, Oregon

Some Want You to Believe Protesters are "Outsiders." Don't Believe Them.

At least six Black Lives Matter protests have happened in Central Oregon in recent weeks—and it wasn't "outsiders" or "antifa" organizing them. 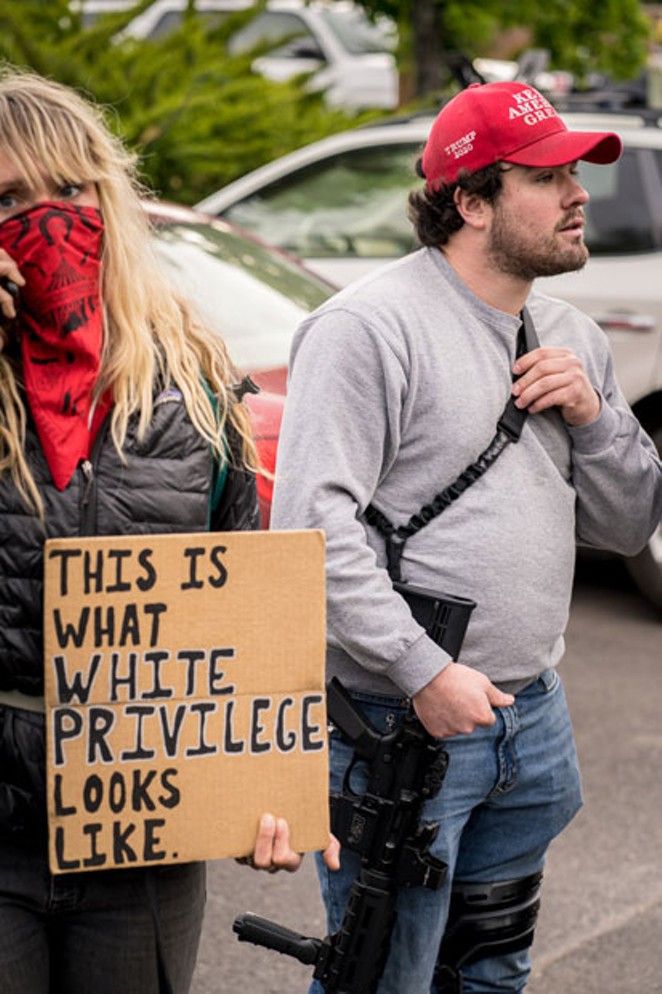 ver the past several weeks, peaceful protesters have gathered not once, nor twice, but at least six times in various cities around Central Oregon, showing up to protest the death of George Floyd and other black individuals at the hands of police or private citizens.

Demonstrations like this are happening not just in big cities, but in small ones, like Bend, Redmond and Prineville, all over the United States. Largely, these protests crop up quickly, organized by young people who just feel called to do something. Bend's first Black Lives Matter protest was organized by a 21-year-old and her friends in less than 24 hours, she told the Source last week. Young people are using their social networks to spread the word quickly, and with big turnouts.

Yet meanwhile, others have turned to social media and their own networks to spread a pernicious piece of misinformation that appears far more coordinated and detrimental to our communities.

In cities including Bend, local groups, including the Deschutes Republicans, have been using their platforms to spread the rumor that "busloads of out-of-towners," sometimes identified as "antifa," (short for anti-fascist) are coming into small towns to wreak havoc. In some locales, this fear-stoking misinformation has brought out heavily armed counter-protesters. In Prineville, a confrontation with counter-protesters at the end of an otherwise peaceful event included shouts of "get out of our town!" and "this is OUR town!" directed at locals. In some places, agitated groups, anxious about the arrival of "busloads of antifa" protesters, have had to be stood down by law enforcement.

An NBC News report Saturday boasted the headline, "In Klamath Falls, Oregon, victory declared over antifa, which never showed up," followed by the sub-headline, "Towns from Washington state to Indiana have seen armed groups begin patrolling the streets after rumors spread on social media about an antifa invasion."

This is a disturbing trend, but it's become par for the course when attempting to discredit movements that seek change. Taking to social media and blaming outsiders can make it seem as if our community does not have the same problems and has no need to grapple with the issues that larger more metropolitan areas do. Much in the same way that some will say it's the Californians moving into Oregon who are causing our housing affordability and homelessness problems, putting the blame on "the other" shifts the responsibility for reform.

If we believe it's only out-of-towners who would dare to show up and protest about the value of black lives in Bend or Redmond or Prineville or Klamath Falls, then we can continue to say, "We don't have a problem with race here," and sweep things under the rug when the heat of this protest moment simmers.

Racism exists in Central Oregon, and it's our very own teen children and sisters and brothers and aunts and uncles and cousins working to speak out against it by organizing these marches— not some scary perceived specter of a far-left activist group, which, according to an FBI report last week, has not had a hand in the violent elements of recent protests.

The local youth organizing local Black Lives Matter protests have not shown up armed. But in some cases, those who believed in a threat of "out of towners" did. This is a recipe for disaster.

There are those who want you to believe protesters are "outsiders" here to destroy "our" way of life. Don't believe them. Instead, welcome this opportunity for community growth and change.