The return of Swill and some tasty Yakima brews 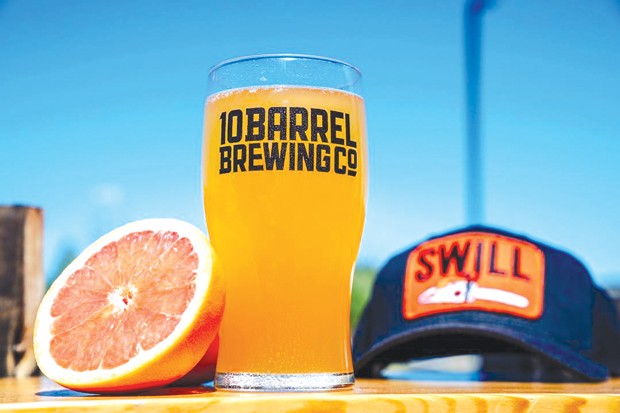 It's mid-July and judging by the crowds downtown and at every drinking establishment, it's another very good summer for local beer fans.

The proliferation of new bars and restaurants dotting Central Oregon has brought a wild amount of variety to the drinking scene this summer. But some things are still eternal, as 10 Barrel is demonstrating with the resurrection of Swill.

Swill's history is about as wild as 10 Barrel's itself. First debuted in 2013, Swill is a radler, a German-style mix traditionally made from light lager and sparkling lemonade. The original version of Swill was a mix of Berliner weisse, orange juice and soda, and it was an excellent summer thirst quencher—very much like citrus soda, except light-bodied and not so overladen with alcohol that it can't be quaffed while operating a lawn mower. (Just not a riding mower. That might be DUII, assuming someone's daft enough to drive one down a public road.)

The '13 Swill was such a success on tap that 10 Barrel launched it again the following summer, that time infusing it with grapefruit instead of orange. The resulting change in taste wasn't to everyone's liking—and, more distressingly, bottles started exploding due to unintended fermentation in the bottle, leading to a recall.

It's come and gone in the ensuing years, with the last bottle release coming in 2015, but now it's back at 10 Barrel tap houses. Grapefruit is the main citrus flavor once again, but the body's old-school Swill, and it couldn't be more refreshing and flavorful. And just in time for 98-degree weather, too!

Looking for something a bit more novel than a radler, though? Look northward to Yakima, Wash., whose breweries are starting to make inroads south.

The Yakima Valley in south-central Washington is where three-quarters of America's hops grow. It thus makes sense that a bunch of craft breweries have popped up in the area over the past few years. The first real standout was Bale Breaker Brewing, whose cans have haunted Portland's beer shops for a while and are now making inroads southward. Topcutter and Bottomcutter are their flagship IPA and imperial IPA, respectively, and they're the quintessential Northwestern pales, a bit lighter on the palate than average for IPAs, but bursting with piney, resiny flavor.

Lesser known but just as worthy is Yakima Craft Brewing Co., whose kegs are bumping around Bend's bars as of this writing. Launched in 2007, Yakima Craft is currently making a bid to become a Bale Breaker-style regional brewery in the Northwest, and a wide variety's now available here, from the light 'n breezy Pilsnerd to Red Hazy Skies, a New England-style red IPA with raspberries added to give it the look of a fruity, over-21 Hi-C drink. Between this and Swill, it might be a very fruity summer for Bend beer fans.