Sorry Folks, We're All Sold Out... of Baby Chicks

The pandemic ignited an interest in backyard gardens and raising animals

Since the early days of the pandemic, some grocery store shelves were bare for days as supply chains slowed. Around the same time, Americans heard stories from abroad of strict lockdowns: People couldn't even leave their homes. Who knew if the store would even stay open? 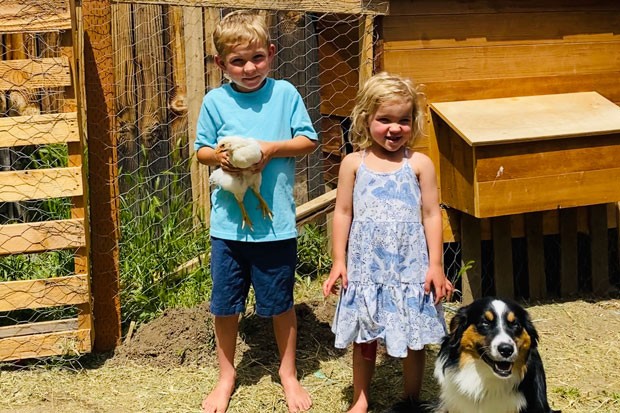 The combination of shortages and pandemic panic spiked interest in a back-to-the-land movement here in Central Oregon. As people dig their own gardens and build their own chicken coops, local stores have run out of seeds and chickens. Today, if you want to buy a baby chick in Central Oregon, your only choice may be to order the little ladies online.

"We had a couple of weeks where we sold out within an hour and 15 minutes," said Joel King, the lawn and garden manager at High Desert Ranch & Home in Bend. "We were taking more than 50 calls a day after we sold out. I made a gross under estimation when I ordered our birds this year," King said.

"There was one week where it was crazy, a mob scene, people were over-eager and weren't staying 6 feet apart," King said. "But most weeks customers were well behaved."

HDRH specializes in rare and specialty breeds of chickens, which have historically been a niche market in Central Oregon. One example of rare breed in high demand is the Ameraucana chickens—also known as Easter Egg chickens, nick-named for their unique gene that produces greenish-blue eggs.

But this year, there were some weeks that King couldn't be picky about breeds and instead gratefully accepted more common breeds from hatcheries that had some extra chicks. One of the most popular American chicken breeds is the Rhode Island Red known for its brownish-red feathers and bright red head. King said he sold many of those.

It's been exciting to see a surge of interest in self-sustaining practices like pandemic gardens and raising livestock, King said. He's meeting many new customers, some who have actually begun to raise cattle and other large animals for the first time.

"The cleanest food you get is the food you grow yourself," King said. "Livestock teaches kids the way life works, the good things and the bad things. We hope the animals are well cared for."

Liz Lotochinski has been raising chickens since 2007 and organized the Annual Chicken Coup Tour for many years to educate the public and raise awareness about the benefits of the animals.

"The reason I got into them in the beginning is because they are small, curious, friendly and deliver a present every day," she said.

I guaranteed them room and board for life, and when they went to chicken heaven I took them out to BLM land for the coyotes to find them.— Liz Lotochinski, chicken enthusiast, real estate broker tweet this

She's not surprised chicken movement is on the rise.

"The pandemic has offered us a bit more time we didn't have before," she said.

Lotochinski was a chicken connoisseur of sorts, and collected a variety of breeds including the Barred Rock (Plymouth Rock) chicken. This breed has thin zebra stripes circling their bodies from their black and white feathers. She also treasured her Ameraucanas, especially for their "Martha Stewart blue" egg shells.

"There is nothing like a homegrown chicken egg with the bright orange-yellow yolk," Lotochinski said. "It all depends on what they eat, the different kinds of scraps they get and of course, how they are loved."

Lotochinski never ate her hens, though she said she still buys "grocery store" meat from Costco.

"I guaranteed them room and board for life, and when they went to chicken heaven I took them out to BLM land for the coyotes to find them," she said.

Chickens, kids, a dog and an occasional elk

Christy Tanner is Lotochinski's tenant in Redmond who decided to get chickens when the pandemic hit. Tanner's husband is an archery-only elk hunter.

"We wanted to be more self-sustaining," Tanner said. "We have three young children and a mini Australian Shepard. He likes to play with [the chickens] and he doesn't hurt them. It's fun for the kids to grow up with backyard chickens and learn how to take care of them, and we'll be better prepared if we need a protein source."

For Tanner, actually getting chickens was a challenge. She wanted to get them on Easter Sunday, but the local stores were sold out. So the family drove to Green Drive Mercantile in Culver, where they picked up a few unique breeds.

"We wanted a breed that would be good with kids. Silky chicks are fluffy and funny looking, but they only produce about 160 small eggs a year," Tanner explained. "The other two were New Hampshire chickens whose egg count is around 280 a year."

For people who are interested in buying their own backyard chickens but can't find them available locally, Lotochinski recommended Murray McMurray Hatchery, which will mail the chicks right to your door.