Source Material: Best of the Year

Looking back, this year is really a blur. So much has happened, and almost so little at the same time. For musicians, this year was a test—and if I was in any position to give out grades, I'd say you all did wonderfully. A+ marks for the class. Some of the best music I've heard in a while has come out this year; especially on a local level, the Central Oregon scene has shined.

So to celebrate with my last Source Material of the year, here are 10 of the best releases (songs, albums, EPs) to come from Central Oregon artists this year, in no particular order. 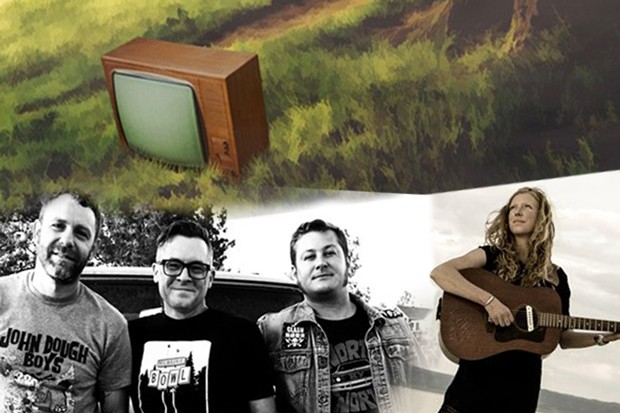 At the beginning of the pandemic, The Roof Rabbits delivered a four-pack EP that would go on to be the soundtrack for many of my early days in quarantine. As a follow-up to the band's excellent debut album, 2018's "Creature Comforts," "Arizona" makes for a passionate and high-quality EP of punk rock.


This Is (Not) All There Is - MOsley WOtta

Jason Graham came READY to rap on the latest MoWo project. Throughout "This Is (Not) All There Is," Graham brings a fiery energy as he spits and rips through a variety of flows (Graham is not a one-trick pony), while speaking on a mess of important issues (religion, racism, economics). You'd be lying if you said "Killy Holiday" doesn't make you want to run through a wall. This is MoWo's best work yet.

Ella Peterson is just 17, but she knows how to write a song. "Wallow" is a song that tackles anxiety and getting inside your own head. For the year we've had, "Wallow" is a much needed listen and release. Sometimes wallowing in your own sadness strangely feels good, and we've all earned a little bit of wallow-time this year. It just sounds better when Peterson sings about it.

"Mercy" marked Night Channels' first EP release, and damn did they get off to a nice start. Through six songs you get nothing but strong alt-rock; fueled by notes of blues, jazz and even pop at times. This may just be the beginning for these guys, but they're definitely headed the right direction.

"Middle Ground" is such a pure and fun listen. As Leadbetter's first solo album, it feels like these songs have just been waiting to come out of him for quite some time; they all sound so polished and complete. From groovy guitar riffs, mellow blues ballads, catchy harmonies and more, "Middle Ground" is an awesome showcase of what Americana can encompass.

Marshall released a handful of solo tracks this year, which I assume means big things coming in 2021. My personal favorite was "Go Go," a fun swing track about falling in love with a go-go singer that really has that big band feel. Use this one to fill the dance floor.

As The Color Study's debut, the self-titled album does so many things right. For one, the instrumentation throughout is expertly placed and so abundant. Somehow The Color Study managed to utilize so many pieces of sound in a way that still lets each instrument breathe, without songs becoming cluttered. Second, the writing feels honest and is catchy when it needs to be. It's a spectacle of alternative rock—one that honestly leaves me in awe.

The Source recently ran coverage on "Soul Sprint," the latest track from Bend producer Jordan Russell, and I'm still not over it. I've sent it to friends and played it on repeat again and again. Why? It takes me to a happy place. "Soul Sprint" is a pretty mellow beat that somehow finds a way to erupt with joy. Make sure to stick around for the drop just after the two-minute mark to get the full effect of what I'm saying.

The writing on Alicia Viani's debut is what really makes this project hit home. Of course her pinpoint, velvety vocals are amazing, but something about Viani's lyrics really stick with me when I listen. She's a person with a lot to say and stories to tell, and she does so with intent and a glowing softness in her delivery. Before you know it you're drawn in and eagerly lingering on the next word to come out of Viani's mouth.

It'd be a crime to not mention the ultimate Central Oregon release this year in my end-of-the-year list. So thank you to the High Desert Music Collective and many, many, of our great local artists, because this thing rocks. It's 58 songs of local music; from rap, to rock, to folk and more, and with it, "High Desert Calling Vol. 1" is the perfect symbol of how resilient our music scene has been this year, and how they've managed to navigate through one of the toughest obstacles artists have ever faced. Kudos to all of you.