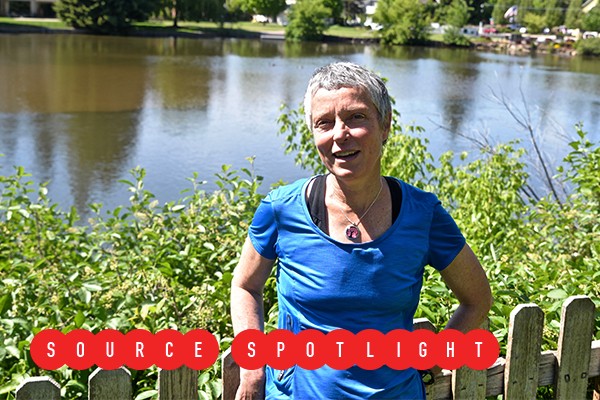 "He said to me, 'Gail, I want to talk to you about wetlands, and troublemakers...' I couldn't believe he was trying to silence me...he was the one that turned me into an environmental activist."

Gail Snyder was born an environmentalist. "It's the core of my being," says the cofounder of the Coalition for the Deschutes, "and sometimes that means, living in deep and abiding despair. I joke that at times I'm not fun to be around, but I wake up each morning determined to make a change."

The Australia native holds a master's in physical geology and has been championing for the restoration of the Upper Deschutes River for over four years. "People are born with innate skills," says Snyder. "Some are born mathematicians, writers, entrepreneurs, musicians and farmers. I was born an environmental activist. It's just who I am."

At first glance, one wouldn't suspect the soft-spoken, easygoing academic to be a critical component behind the saving of Colorado Springs' famed backyard mountain, Pikes Peak — a feat that awarded her the "Conservationist of the Year" award by the Sierra Club. But within a few minutes of quiet conversation, Snyder's vehement passion, intelligence and in-depth knowledge of the workings of our surrounding environment are evident. Her earnestness is clear and her passion explicit.

"I've been known to be disruptive," she says, laughing, "...But I love our Earth processes... and I love how geography embraces all the disciples." Explaining her fixation on geography further, she continues, "So you start to look at it through multiple lenses — economics, history, culture, the legal system, the social system. It raises important questions, such as who's got the power, who owns the narrative? What's the status quo?"

Challenging the status quo is just what Snyder excels at, and did in Colorado, when as a graduate student, she uncovered the mass degradation that a dirt road leading to the summit of Pikes Peak was causing to its surrounding landscapes. This included 60 acres of high-altitude, extremely rare wetlands that were threatened. "They were causing huge amount of damage to the wetlands, burying tundra, burying trees, gravel running down this road...they were sacrificing half the mountain, all for this road."

She joined the Pike Peak's Advisory Commission — a committee that she says was largely a "rubber stamp" council. "They said to me, 'These meetings used to be so much fun before you came along. We would meet for a few minutes and go and have a beer,'" she says, laughing. "And I was naive at the time, I thought all I had to do was show them my research, my photos and they would make changes." Snyder soon found out that the big business of car rallies carried more weight than the ecological implications.

She learned first hand the trouble one can find oneself in when research goes against societal wants. Snyder was about to present her research findings to the committee, when the director of transportation got wind of her troubling wetland implications and intercepted her before the meeting. He said to me, "'Gail, I want to talk to you about wetlands and troublemakers...' I couldn't believe he was trying to silence me. I still see his face to this very day." She credits this experience to the turn of events that led her away from academia. "Before him, I thought I would go on and do my PHD, but he was the one that turned me into an environmental activist."

Defiant, the experience fueled her desire and Snyder went on to give her full presentation to the committee — uncensored, of course. "I made sure to say 'wetlands' as many damn times that I could," she says. "And then the next day, I called the EPA (Environmental Protection Agency)."

After several many years, Snyder won the fight, using her meticulous research as a foundation for the case. The Forest Service ended up paving the road. "Sometimes environmentalism is counter-intuitive," she says, "In this case it was better to pave it so it would stop the erosion. And guess what? The car rally drivers love it even more now."

Several stints with nonprofits and as a legislative aide in Salem, Snyder and her American husband, Syd, who she met in 1978 while hiking in New Zealand, retired to Bend in 2013. Her attention turned to the Deschutes River after noticing the slow water flows, rising temperatures and erosion of the riverbanks. She co-founded the nonprofit, Coalition for the Deschutes, in 2016.

"Just like Pikes Peaks, the Deschutes' riverbanks show scarring. Trees are eroding, sediment is growing. The erosion of the Upper Deschutes plays into issues with sediment in Mirror Pond." Snyder notes the water qualities, the rising temperatures and the impacted wildlife and fisheries as major issues that need attention. "Oregon has many good laws," she notes, "But lack of funding means there is trouble with policing and implementation of these laws.

"But, if we live in Central Oregon, and we call ourselves Central Oregonians, we need to own the past and be responsible. To lock ourselves in the past and lay blame is not productive. We need honest accounting of the past, a reckoning of where we are today and work together to make change."

Also the former program director of Central Oregon LandWatch, Snyder notes the progress she has seen in the last two years. "I feel very optimistic. I see the irrigation districts doing the right thing. There's a genuine, sincere desire to fix the river... It's a huge problem to tackle." Commenting on how tough conservation work can be, she says, "You uncover two stones, and then find two more. There are so many layers you must consider."

When not pulling up spreadsheets, photo documenting, organizing field trips and advocating for awareness and education, Snyder happily spends time with her husband of 37 years, their two children, and now grandchildren. She's been a vegetarian for nearly 40 years and says that choosing not to eat meat feels essential to her being — just like being an environmentalist. "I don't care if other people eat meat. I think it's a natural thing for humans to do, but I do not want to."

Snyder also runs ultramarathons, and says she has accidently won five races. "I still and will always identify as an ultrarunner: ultrarunning is as much a philosophy and way of life as it is a sport." When she won a trail double-marathon, she came in first overall, beating her male counterparts. "I left them in the dust... that was really sweet."

Using education, awareness, research and wit, Gail Snyder will keep defending the river. "The work will never be finished," she says, "But as long as I am alive, I will care because of my children and my grandchildren."