A low-key spot to teach a kid to fish

June 12, 2019
comment
Sometimes teaching kids to fish takes much more patience than the actual fishing part. You've got to tie all the tackle, bait the hook—and if you were duped, you got an old-school push button reel that will fail the second time your child casts it.

After reading the Oregon Department of Fish and Wildlife's sport fishing regulations, I wanted to find a place that's easy for kids to nearly fish completely on their own. A good spot for this is the Century Drive Gravel Pond. 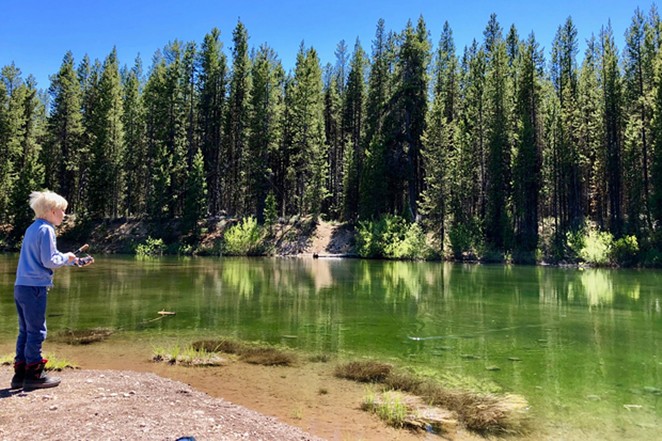 The pond fills up with snow melt on good snow years. When this happens, ODFW will come out with one of its stocking trucks and dump hundreds of rainbow trout into the crystal clear water. You can literally see the fish swimming around. When you've found the right color of PowerBait, you can see them take the hook.

After tying the terminal tackle for my fishing buddy and 7-year-old son, I gave a quick lesson on casting a spinning reel: Just point the rod directly behind your shoulder and let go of the line right after the rod comes past your ear. My son's first cast went straight up in the air, his chartreuse bait landing in the dirt at the pond's edge.

"That didn't go very well," he said, reeling in his less-than-perfect cast.

After a quick reminder on how to cast, his next throw went nearly across the pond. He took a seat in his folding camp chair, let the weight sink to the bottom, and waited semi-patiently for a fish to take the bait.

Some of my son's friends already have their own cell phones. He likes to play video games, as most children his age do. After about 20 minutes of not catching a fish, he started down the, "I have nothing fun to do" routine, but then his rod jumped off the tackle box and bounded across the gravel toward the pond.

Aidan caught his first fish all by himself that day—in fact, he caught six fish without any help, except for the tying of knots. The world of video games became unimportant for a nice, sunny afternoon.

Century Gravel Pond is located off Cascades Lakes Highway on the way to Cultus Lake. Osprey and bald eagles patrol the skies, along with some very chatty ravens. There's no marking for the gravel road to the pond—but it's not a secret place and is about a quarter mile on the road to Cultus.

Although there are no camp spots at the gravel pond, Cultus Lake rents cabins and has a restaurant. You can also camp at Crane Prairie, or since you're in the Deschutes National Forest, you can camp on many of the dirt or gravel roads—just make sure you have the Nortwest Forest Pass, so you don't get a ticket.

Fishing the pond is pretty straightforward: bring light gear and a couple of different kinds of PowerBait. On our trip, chartreuse was the color that worked the best, although rainbow caught one fish as well.

ODFW stocks the gravel pond with harvestable rainbow trout. We released all of our fish for someone else to catch, because my fishing buddy doesn't like to eat them.