Some business owners say panhandlers are wrecking the vibe. Here's what downtown leaders are doing about it 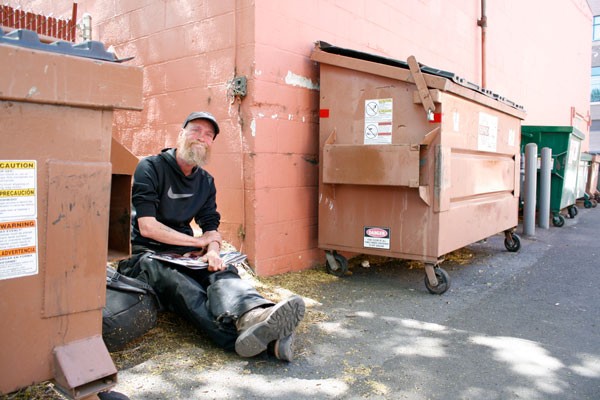 Let's face it, Bend isn't a sleepy logging, skiing, biking...—you get the point—town anymore. It's becoming a city, and cities have issues, such as people sleeping on the streets or in alleyways or using the alleys as a toilet. And the oft most-hated thing for people walking down the sidewalk on their way to dinner or shopping: panhandling.

The Downtown Bend Business Association is trying to slow instances of panhandling with the creation of the Bend Cares campaign. It's designed to "help educate our community on how to give responsibly, add additional security in downtown, and increase the cleanliness of downtown with monthly high-pressure washing." The City Council voted on April 18 to fund the DBBA by taking some of the $.25 per square foot fees that businesses inside the Economic Improvement District have elected to pay. According to a DBBA budget draft, this put about $46,000 toward a new security program and more than $8,000 toward cleaning.

"Here's what we saw talking to business and building owners: 'we want our business to succeed and we want our guests to come down, park in the garage, walk through town and feel safe. We want our employees to go to their cars and feel safe,'" Mindy Aisling, DBBA's executive director, said. "And all of that needs to happen."

Bill Smith, who I found sitting between dumpsters in the alleyway by Pedego Electric bikes May 14, told me he's been homeless since he was 12. The now 55-year old says he doesn't panhandle or roll his sleeping bag out on the sidewalk, and that most people panhandling are respectful.

"There's been a few times I've seen stuff that's been out of line, but most keep in line," Smith said, reading a magazine. "Most people will offer you money or food without having to ask."


"The more people realize the services available, and funding those services is better than giving to an individual panhandler. The charitable community is very connected and open." —Donna Burklo tweet this

The projects the DBBA is working on are slated to begin in late June or early July, Aisling said, starting with the pressure washing and cleaning and the creation of a website, Bendcares.org, which will allow people to donate money to local charities who help with the homeless.

"What we thought was, when somebody sees somebody with a sign on the street and they're asking for money, how great would it be if there was an app or like an easy website where you're like, 'oh, donate here,' and it goes directly to an organization," Aisling said.

One of those organizations is Bethlehem Inn, a homeless shelter in Bend.

"We are possible beneficiaries and I think the funds will go where they are most needed," Gwenn Wysling, Bethlehem Inn's executive director, said. "I think this program will really help strengthen the fabric of our community and provide a long-term solution for those who are in crisis or struggling."

Another beneficiary is Family Kitchen, which serves three dinners and four lunches each week, averaging 4,700 meals a month, according to its website.

"The more people realize the services available, and funding those services is better than giving to an individual panhandler," Burklo said. "The charitable community is very connected and open."

Smith said he thought the ability for people to donate to local charities would be helpful, and that he uses meal services every day, except Sunday.

"You have to plan ahead," Smith said.

Lt. Clint Burleigh, of the Bend Police Department, said he sees the increased security as an asset to help police increase their presence and safety in the downtown area.

"We have worked with the security company to augment everything else we have been doing to increase safety in downtown," Burleigh said. "We are not trying to replace our staff with security; we are using the asset to enhance the safety we provide."

Aisling said she would like to see a program in the future that allows homeless people to work for some of their aid—like spending a couple of hours cleaning alleys—to give them empowerment and take ownership about how downtown looks.

"As we expand, if we expand it into like a job program, we can put that on the flier and do that kind of thing," Aisling said. "But I would love to see that. Really for me, it's about that integration piece—we're all here, we all have needs—let's see how we can integrate them instead of saying, 'oh, those mean merchants don't want people downtown,' or 'those mean transient people are causing my customers problems.'"