Paul Dewey founded Central Oregon LandWatch in 1985, and recently stepped down from his role of executive director to strategic advisor—allowing him to remain on the frontlines of wildfire prevention. 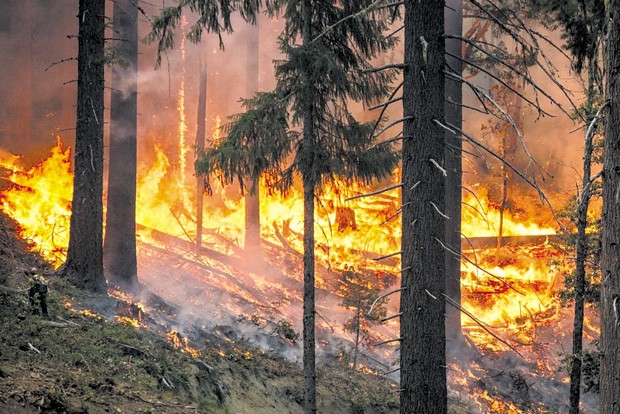 "I've been working on these issues for the past 35 years," he said. "LandWatch involvement in wildfire protections extends over several decades. The west side of Bend is built into the ponderosa pine forest, which has a fire-based ecology. Between 20 and 25 years ago it was recognized as one of the most at-risk communities in the west, among places like Los Alamos, Missoula and Ashland. It's because we developed so far out there."

Dewey explained that the main priority of LandWatch is ensuring that urban developments do not extend into high-risk areas. "Plans to expand west were made in the late '70s," he said. "Really, it didn't seem like a good idea; even then. Recent events like the Rooster Fire that happened roughly five years ago and the Two Bulls Fire reinforced how unwise it would be to build further out."

Affordable housing is a major issue in the City of Bend, as the population continues to grow and supply and demand nudges the cost of living higher. In 2009, the City of Bend submitted its Urban Growth Boundary proposal, suggesting the city be expanded by 8,400 acres. State officials said no, and city leaders eventually saw a far less expansive plan approved. Had the state approved the first plan, the land between Tumalo Creek and Skyline Ranch Road would have been up for development, undeniably providing more housing (up to 5,000 new homes)—but potentially resulting in consequences far more dire than unaffordable living. Dewey believes one of LandWatch's most notable achievements to date was effectively hindering the proposal and protecting what is now known as the Westside Transect Zone.

LandWatch will be actively fighting the development of Skyline, because honestly, it’s insane.” —Paul Dewey tweet this

"The Transect Zone borders Shevlin Park and creates a buffer between the park and existing developments, which aids in wildfire safety and the protection of the wildlife habitat. Historically, the threat of fires in Bend is caused by strong winds from the northwest; fires start in the northwest and run southeast. The Transect protects Awbrey Butte, Northwest Crossing and all of the developments behind it."

Currently, Dewey and his team are focusing their attention on Skyline Forest, an expansive piece of timberland between Bend and Sisters. "It's the last large block of timberland in the county, and it's up for sale," he explained. "The forest is over 33,000 acres, and it's on the market for over $100 million. There has been talk of developing hundreds of homes or some kind of destination resort. It's just not the place for that. LandWatch will be actively fighting the development of Skyline, because honestly, it's insane."

Dewey noted that he hoped the creation of the Westside Transect would put a stop to dangerous expansion. "In a forest zone like Skyline, you can build a house on every 240 acres of land; that's the minimum. Law requires the applicant to show that building in this zone will not significantly increase fire risk or risk to firefighters. We've successfully argued in the past that what was being proposed would dramatically increase risk. We litigate standards, bring in expert witnesses that attest to the development and pull data from the Oregon Department of Forestry. The more houses that are located in a forest, the greater number of fires there will be. Firefighters are required to protect structures rather than the woods themselves; there is a very negative effect of having structures in the woods."

Dewey says continuing to prevent urban development in high-risk areas is crucial to the well-being of local forests and Central Oregonians. "A couple of summers ago there was smoke in the air for weeks at a time," he said. "This is a recent phenomenon indicative of climate change and of the forests drying out. Fire should be considered the main issue when it comes to protecting the city. Really, if you look at a fire map, you'll see that the whole county is at risk."