Speaking to the Artist's Heart

Three films from BendFilm that speak to the artist's experience, and how to get them post-festival 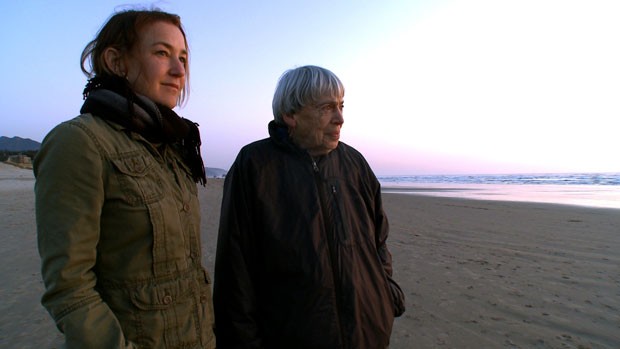 It may seem strange to tell you about films that played last weekend at BendFilm, but these three films speak deeply to the artist's experience of commerce, inspiration and the changing role artists play in the world. Plus, you can still access them.

"The Worlds of Ursula K. Le Guin," a documentary from first-time filmmaker Arwen Curry, who spent 10 years working on the film, showcases the history and amazing work of the beloved Oregon writer who passed this year. One of the most interesting aspects of Le Guin's work, seen in the film, was her willingness as an artist to evolve and to allow her work to evolve with her. As her perspective changed, so did her work. She talks about how important that is for artists to do, something we're allowed to do—to evolve and change over time.

The film ends with one of Le Guin's most prophetic talks, the one she gave at the National Book Awards. She says, "We will need writers who can remember freedom. Poets. Visionaries. Realists of a larger reality. Right now, we need writers who know the difference between a market commodity and the practice of an art." It's a stunning testament to a woman who fought to be taken seriously as an author, regardless of the genre, regardless of her gender—and one you can find airing on the next season of American Masters, reported to be airing next year.

The second film I want you to look for in the world is "Ingrid," about an entirely different female artist. This first feature for the artist Morissa Maltz is a portrait of an artist who has left society to be on her own. Ingrid, a German woman in her 70s residing in the rural woods of Oklahoma, is a refugee from the fashion industry who now fills her days caring for her animals, sculpting and dragging massive stones from the river up a hill, to use to make walls for her ever-expanding home. Maltz, who has previously created objects of art for Urban Outfitters, wanted to make a film about "someone who was making things to just make them. Not for any sort of profit, but just to make things." "Ingrid "was the result of that exploration. It's a beautiful portrait, shot over three years, that reveals the choices artists sometimes make to satisfy their own soul, only to understand that it may never be satisfied in the end.


"Mr. Fish: Cartooning from the Deep End" is probably the most important film on the subject of censorship and what that truly looks like in the 21st century. Following the editorial comic, Mr. Fish, from receiving death threats over his depiction of President Obama to finally feeling relevant again after the 2016 election, this film shows what the life of an artist can really look like, even after achieving a certain level of success. It also speaks to the importance of artists' satire and political commentary as a vital part of our democratic process.

And fortunately for you, you can still access these films, while at the same time supporting the pursuit of local talent and creativity. If you become a member of BendFilm, you can have access to the entire collection of films they've shown at the festival for the last 15 years.