In '03, Central Oregon's meth problem was raging. State legislators eventually passed a law in 2006 that required a prescription to buy pseudoephedrine, a key component for home meth labs, greatly cutting down on its manufacture in the state.

t first saw the light of day as a new and improved (more potent) version of the pharmaceutical decongestant amphetamine. Armies saw it as the answer to battlefield fatigue and administered it to their soldiers during World War II. In the '50s, students, athletes, and truck drivers filled prescriptions for it to enhance performance and stay awake.

But when a "speed freak" subculture of addicts injecting the drug emerged during the 1960s, methamphetamine use was promptly locked down. Firm legal restrictions on prescription of the drug were put in place. The pharmaceutical supply dried up. To satisfy continued demand, rural, black-market production facilities started springing up all over the western United States. The concept of the high desert biker meth lab was born.

Forty-some years later, methamphetamine abuse and addiction are an endless plague on public health and safety in Oregon's communities—even in semi-urban communities like Redmond and Bend.

The drug, referred to in recent years as speed, tweak, crank, white dope, etc., in the language of the counterculture, owes its particularly malevolent short- and long-term effects to its ingredients. Products involved in the meth "cooking" process, all of which are readily available to the public, include denatured alcohol, kerosene, lye, acetone, battery acid, phosphorus, and anhydrous ammonia. The end product can vary considerably from batch to batch.

"Over here, the methamphetamine that I've seen the most is pretty nasty stuff," said Dustin, a Bend man who's a recovering addict and an ex-meth cook/dealer from McMinnville. (He agreed to speak with the Source Weekly on the condition that his last name be omitted.) According to Dustin, most meth changing hands in Central Oregon is "a lot of cut and not a lot of drug." He describes such methamphetamine as particularly apt to compel users to do "whatever it takes" to get more of the drug. "Whatever it takes," said Dustin, might include burglary, violence, and other crimes.

Dustin started using meth regularly while in the Navy in the mid-'80s. More income and the lack of parental supervision made it easy for him to try the drug and to use heavy amounts once he decided he liked it. "It was the first thing I did I really enjoyed," he said. "I guess it really grabbed ahold of me." Initially, Dustin was into the sustained "upper" high meth provided—staying up all night, feeling compelled to be busier than normal. "I'm not a downer type of person," he said. 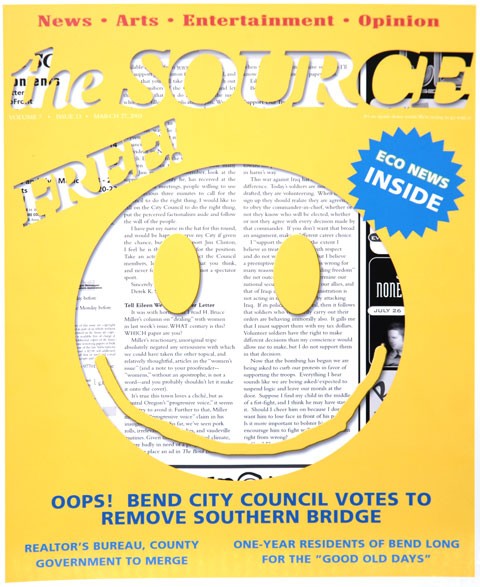 Dustin spent the ensuing 15 years in various states of active addiction to the drug before the threat of a four-year prison sentence helped convince him to put his best foot forward in treatment at Serenity Lane in Bend. He's been clean ever since.

But the effects Dustin experienced during the years he abused methamphetamine continue to affect his health. The appetite-reducing effect caused him to drop weight significantly when using and to gain excess weight when not using. Dustin's chiropractor tells him his habit caused deterioration in his spine that led to four fused vertebrae. He's experienced lots of upper respiratory illness, damage to arteries, chemical burns from splattered drain cleaner (sustained when cooking meth)—not to mention perhaps-unseen effects from exposure to toxic and carcinogenic fumes during the cooking process.

Dr. Tom Wendel, who's worked for about two years at Bend Memorial Clinic's Urgent Care Center, has seen countless patients like Dustin over the course of his career. In the 15 years before moving his practice to Bend, Wendel worked strictly as a rural doctor. He practiced in Burns during the last 13 of those years, covering all aspects of medical care, in his words, "from the womb to the grave."

Wendel noted that bacterial endocarditis (inflammation of the lining of the heart), major infections out-of-control asthma, high blood pressure, and hepatitis also are common health-related repercussions of methamphetamine abuse. And many medical problems, he added, are compounded by the meth addict's neglect of his or her health in general.

These "secondary complications," according to Wendel, also often include a wide variety of metal health problems—mood disorders such as bipolar disease and depression, and even psychotic states. Dustin alluded to the same in layman's terms, saying meth "distorts your perception of reality greatly" and "you lose yourself into it."

Wendel saw firsthand the worst possible outcomes of methamphetamine abuse and addiction during his time in Burns. He watched a large hotel burn to the ground after a meth lab inside exploded. As the Harney County coroner, he worked through a two-year period in which three murders were committed in the area, all of them drug-related. The county's normal homicide rate, according to Wendel, previously had been one murder every 10 years.

In rural communities such as Burns, Prineville, Madras, John Day, Lakeview, and Klamath Falls, said Wendel, methamphetamine generally is much more pervasive than in more urbanized places such as Bend. Since the first clandestine meth cooks smuggled in large quantities of precursor chemicals from Mexico and started setting up ship in the 1970s, the most out-of-the way places throughout California and Oregon have been choice locations for the labs.

endel hasn't treated any "acute, directly related manifestations" (such as overdoses) of meth addiction in Bend. Nonetheless, he does see a significant number of local patients who are recovering from meth addiction or are still using. Among such people, indirectly related complications such as depression ad major infections are common. He's also noticed evidence of a large amount of methamphetamine in Central Oregon's high schools.

Karen Tamminga, supervisor for the Deschutes County Mental Health Department's Adult Community Treatment Program, deals somewhat more directly with the country's active meth addicts. According to an e-mail from Tamminga, methamphetamine is the third most commonly abused drug in Central Oregon, after alcohol and marijuana. She supplemented the list of complications arising from the meth abuse to include high blood pressure-related instances of stroke and tachycardia (abnormally fast heartbeat), dental problems, "meth sores" (abscesses), and more. Overdoses, she added, cause hyperthermia (elevated body temperature) and convulsions. Without prompt treatment, they can be fatal.

Tamminga also mentioned the specific phenomenon called Methamphetamine-Induced Psychosis, a condition "common in ERs around the Northwest" and marked by paranoia, hallucinations, mood disturbances, and repetitive motor activity. Most people with this condition are "clear" within two to three weeks, she said, but in a few cases such mental health problems fail to subside. Incidentally, the Adult Community Treatment Program has seen a trend of success in treatment regimens involving "proper mental health medication" along with addiction treatment and counseling.

Tamminga also highlighted the serious risks of methamphetamine use in pregnant women. Every year in Oregon, she said, children born with the drug in their systems are removed from their parents' custody. Meth use in the first trimester of pregnancy inflicts fetal damage that often affects both the physical and mental health of the child.

On Nov. 14, the Deschutes County Commission on Children & Families held a Methamphetamine Summit at St. Charles Medical Center to discuss the problem of meth in Central Oregon and strategize solutions. Speakers at the Summit included Deputy District Attorney Steve Gunnels, who prosecutes all of the Central Oregon Drug Enforcement (CODE) Team's cases, and Linda Swearingen, a former Deschutes County commissioner and founder of Bridges to Hope Ministries. Almost all of Gunnels' cases have to do with methamphetamine-related arrests; 95 percent of the women whom Swearingen assists in transitioning from jail back into society are recovering addicts—most of them meth users.

Central Oregon professionals dealing with addiction and its collateral effects—and the rest of the community—might benefit from the examples of those who recognize the meth problem and are working to fix it. They might also find the recovering addict Dustin's advice on kicking the habit helpful:

"You can come back from it. If you work at it, there's some hope to it. But you've gotta reach out and try."