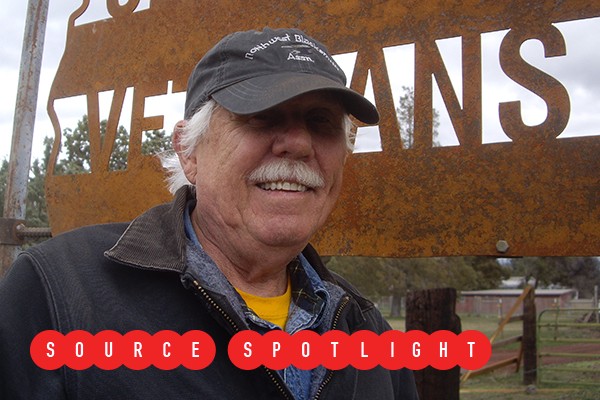 "When I start carving wood, I can lose track of three hours and not know what even happened. I just get zoned into it."

On a recent breezy morning, volunteers gathered at the Central Oregon Veterans Ranch in the high desert backcountry between Bend and Redmond to hang a new sign to grace the front of the ranch. The welded and computer cut sign was designed and put together by local resident George Blackman, who needed help in wrestling the 250-pound behemoth.

After Blackman adapted and changed the scale of the logo, local company CR Fabrication in Redmond cut out the pattern on the sign, including stars and letters. Leading up to the installation, Blackman had been figuring out the best method to hang the sign—lining up the screw holes and drilling through a railroad tie-sized fencepost, aligning the sign with the solid steel poles that will support it, and making sure that it all remained level. While mulling it over, Blackman said he'd changed his mind several times on how best to hang the sign. But with the help of a half-dozen local veterans, everything fell into place and the sign was up in less than 30 minutes.

Blacksmithing is just one of Blackman's hobbies, so for him, making the sign was a fun project for a worthy cause.

"It's just a good feeling of creating a space for veterans who have problems, whether it's physical or emotional," Blackman says. "It's just a matter of trying to take care of the people who got damaged in war."

Blackman was born in Spokane but lived for the most part in Portland before moving to the Redmond area about 20 years ago. He spent 26 years with the Army National Guard. For 20 years of that he was on the National Rifle Team, traveling around to rifle matches all over the country.

When he's not creating wood or steel pieces in one of his shops, Blackman is a volunteer tutor for GED students at Central Oregon Community College (COCC), and also volunteers with his wife, Margie Gregory, with the Latino Community Association. He has two grown children, a daughter living in Indiana and a son in Madras. He and Margie have been married for the past six years.

"I do stuff to support the Latino community," he says. As part of one of LCA's annual fundraisers, he auctions off an introduction to blacksmithing class. The top four bidders get to come out to his shop for a four-hour session, followed by food prepared by Margie. He covers the history of blacksmithing and gives a demonstration, and then the students get to make something of their own to take home. It's usually a bottle opener, a coat hook, perhaps a tool, or even a bracelet, Blackman says.

Way back when, Blackman earned a bachelors degree in bronze casting sculpting from Portland State University. Regarding the scholastic achievement, Blackman says, "I discovered that's a terrible way to raise a family."

On top of a 35-year welding career, he branched out to forging and woodcarving. The latter being what he considers his main inspiration.

"Woodcarving is my first love," he says. "It's a tactile event of pushing a sharp tool through wood. When I start carving wood, I can lose track of three hours and not know what even happened. I just get zoned into it. About the third time I make something, I get bored with it and make something else."

Items Blackman has made include a titanium monkey dangling on his key chain, a 10-foot-tall bronze fountain and a steel wedding arch under which his daughter was married. Additional creations include custom bathroom sinks, end tables and other furniture pieces. He also made the ornamental steel doors at the front gate leading into the fenced-in garden at COCC—giant panels measuring 9 feet wide and 8 feet tall. This was another of Blackman's adaptations, this time from a student drawing, and it, too, was cut by CR Fabrication.

"I got into forging to make woodcarving tools," Blackman says. Forging is the process of heating metal until it is red-hot and then banging on it with a hammer to change its shape and function. "I'm just fascinated watching a volume of metal change to a totally different shape," he says.

Modern welding came about around 1880, but the practice of smithing goes back thousands of years, Blackman says. "Greeks and their gods did smithing," he adds. "The history really fascinates me."

When asked how many hours he spends on any particular project, he responds, "I specifically avoid tracking time. I'm retired."