Jessica Hernandez and The Deltas return to the Northwest, with the next generation in tow 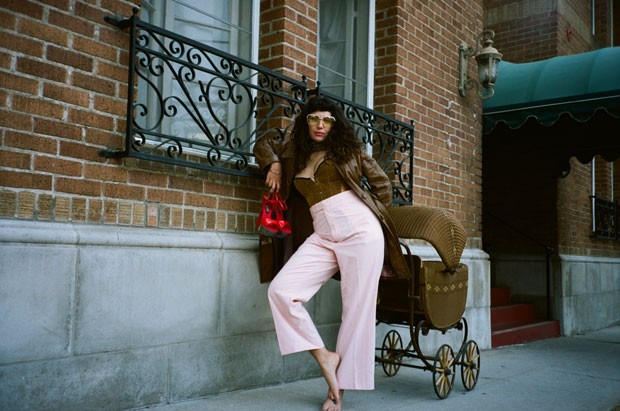 The last time I interviewed Jessica Hernandez, things were different. She wasn't married and her 6-month-old daughter Stella hadn't yet made her debut. For the last five or six years, I've seen Hernandez and her band The Deltas perform a handful of times—each time a worthy, sweat-filled dance session. And now with a baby in tow, I don't expect anything different when the band performs at Volcanic. While behind the scenes, touring has changed for Hernandez, I have no doubt her stun factor will continue to rock us with the same intensity and charm.

"It's changed everything," Hernandez says of touring with a baby. "This Northwest run is kind of my way of tipping my toe into touring again, seeing how my daughter does and seeing how I'm feeling. I haven't really stopped touring, I toured up until my last trimester and then I enjoyed this moment of being pregnant. I played my first show after she was three months old, so I didn't take too much time off."

This time around, Hernandez will be ditching van life to fly with Stella, as driving across the country from her home in Detroit, Mich., likely wouldn't be too fun. On this Northwest tour, her aunt will be joining her to help out with Stella. Hernandez will be with Stella up until she puts her to bed and then takes a Lyft to the venue, arriving right on time to step into the familiar shoes of rock badass.

"I think just being a new mom and trying to be a creative person and artist is hard in general," Hernandez says. "That's my biggest struggle right now is how to create and stick to what I'm passionate about. It's hard to find that middle ground, I've only been a mom for six months, I'm still figuring it out. I want to put 100 percent of myself into my daughter, but there's also this passion that's pulling at you."

Hernandez admits that striking the right balance has been difficult, but she's mom 100 percent of the time while her daughter is awake. Sometimes she'll wake up two or three hours before her daughter rises, using the time to work on her art. She's still figuring it out, and in the meantime, raising a little music lover.

"She's already been loving watching us perform," Hernandez says. Both she and her husband are in touring bands. "I feel like she doesn't fully understand what's going on, but she likes seeing us up there and the lights and the vibrations. My husband had her out in the crowd with her noise-canceling headphones on. It was so comforting for her. The vibrations and the songs she probably remembers. For her, it's just soothing. My husband played a festival and the second he got up there she slept through the entire show."

"The night my water broke, I was writing and wrote one of my favorite songs on the new album." —Jessica Hernandez tweet this
Hernandez and The Deltas are currently touring in support of their most recent dual album, "Telephone/Telefono." Recording both English and Spanish versions of the songs had a large part to do with her family. Her mother is Mexican and her father is Cuban. Growing up, she wasn't fluent in Spanish, and part of her wanted to be able to speak it properly. Her father wanted her to speak English, as he saw the struggle of his family and friends and didn't want that for his daughter. Hernandez started teaching herself Spanish and connecting with that part of her culture.

"It was cool because it was just a couple friends of mine who were translating my lyrics from the English album," Hernandez recalls. "Then we worked together on the translations. They would say, 'This isn't exactly how you would translate. This is more in the musical culture that we would say.' Or, they would insert slang telling me, 'This is a similar type of slang that people your age would use.' Putting in those cultural references that would connect with people my age. It wouldn't have happened if I didn't have these good friends in Mexico City."

Hernandez wrote the next Deltas album while pregnant. The second she found out she was expecting, one of the first things on her mind was writing the new album, knowing once the baby arrived she wouldn't have as much time.

"The night my water broke, I was writing and wrote one of my favorite songs on the new album," Hernandez says. "I feel like it's way more happy and exciting. There's this excitement and anticipation of being overwhelmed with so many emotions. I already started recording and have a new single coming out in the fall."