by Nicole Vulcan and Laurel Brauns

September 11, 2020
comment
The numbers are almost too much to fathom: As of late Thursday, a record-breaking 900,000 acres of land in Oregon was on fire. With that, 500,000 people are under some type of evacuation order. (Update: This is corrected from an earlier report; an estimated 500,000 people are under either a Level 1, 2 or 3 evacuation order, but the Governor's office clarified Friday morning, saying only about 40,000 have been ordered to evacuate.)

Some key takeaways that officials want people to know right now: Don't go into active evacuation zones, and check your local county websites for information on any evacuation orders that might be in effect in your area.

Locally, the Central Oregon Fire Information website offers daily updates on fires in the region, and recommends people text "COFIRE" to 888-777 to receive wildfire and prescribed burn text alerts for the area.

Officials also recommend that people affected by the fires register on the Red Cross' Safe and Well website to help family and friends find information about your whereabouts. As Willamette Week first reported Wednesday, at least two people died in the Santiam Fire Wednesday, including 12-year-old Wyatt Tofte and his grandmother, Peggy Mosso, who were reportedly trying to get away from the fire on foot.

The extent of the fires in the state has led state fire officials to estimate they have roughly half the number of wildland firefighters that they need. With colleges getting set to begin their fall academic terms, officials are asking state universities and community colleges to give excused absences to students who are fighting those fires.


Central Oregonians will wake Friday morning to far smokier conditions than in recent days. That's bad news for locals, but good news for firefighters, who can now begin to get the many fires on the western slopes of the Cascade Range contained. tweet this
Meanwhile, Gov. Kate Brown and National Guard leaders are asking neighboring states, including Utah, to send in more help. State Forestry officials said Thursday they have roughly 3,000 people fighting fires in Clackamas, Jefferson, Marion, Klamath, Linn, Lane and other counties—and that they estimate they need another 3,000 to make headway on the fires.

With winds finally changing direction, moving now from the west instead of the east—which sent strong gusts down the valleys, and caused fires to spread at a rate of several acres per second—Central Oregonians will wake Friday morning to far smokier conditions than in recent days. That's bad news for locals, but good news for firefighters, who can now begin to get the many fires on the western slopes of the Cascade Range contained.

"When we can get aircraft in the air they’ve been very helpful to hold lines," said Doug Grafe, Chief of Fire Protection at the Oregon Department of Forestry during a Thursday press conference.

As of Thursday afternoon, crews were still in life-safety mode, rescuing those who needed help and waiting for conditions in the air to change so they could put more aircraft in the air to create containment lines. Crews had some of the larger fires about 5 to 10% contained as of Thursday, said forestry officials, but on the fire burning near Clackamas County, crews had zero containment due to the conditions. That fire prompted evacuations of the towns of Molalla, Estacada, Silverton and others Wednesday and Thursday. Those cities are just east and south of Portland, Oregon's largest metropolitan area.


As of late Thursday, a record-breaking 900,000 acres of land in Oregon was on fire. With that, 500,000 people have been evacuated from their homes. tweet this

Deschutes County's role in the fires

Sgt. Jayson Janes, the public information officer for the Deschutes County Sheriff’s Office, told the Source that as of Wednesday, Sgt. Nathan Garibay, the county's emergency services manager, had taken search and rescue volunteers to help with evacuations for Linn and Lane counties.

The Deschutes County Fair & Expo Center was the meeting place for people evacuated from the McKenzie Bridge area to escape the Holiday Farm Fire. Geoff Hinds, the director of the fairgrounds, said that the expo center was not nearly as busy as other centers east of the Cascades.

“The majority of what we’ve been able to do is use the facility as a registration point for the Red Cross and others who need to identify the evacuees,” Hinds said. “This is not a cafeteria-style evacuation center, it’s a meeting place, a resource center.”

Some people arrived in RVs and stayed at the fairgrounds, while the Red Cross provided hotel vouchers for another 100 people to stay at the Super 8 in Redmond.

The Expo Center was most crowded during early hours of Tuesday morning and throughout the day, as Red Cross volunteers organized the effort to help the evacuees. A number of people were displaced with nowhere to go at first, Hinds said.

“We’re supportive and appreciative of the efforts of the Red Cross and all of the first responders,” Hinds said. “The smooth flow is a testament to the relationship between the parties; we’re well prepared to deal with the issues that have arisen so far.”

With so many people evacuated, Gov. Kate Brown issued an executive order Thursday, aimed at helping to protect consumers from price gouging. This order also prevents of other essential consumer goods and services. People who suspect price gouging of essential goods—or hotel rooms—can call the Oregon Department of Justice's Consumer Protection hotline at 877-877-9392, or visit OregonConsumer.gov for more information. 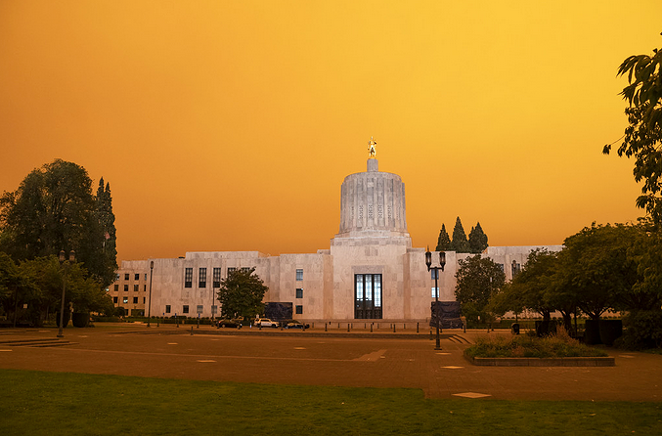 
Bend area fire officials banned all recreational fires in the area due to extreme fire conditions and air quality concerns. Campfires are also banned on all federal public lands in the area—including U.S. Forest Service and Bureau of Land Management lands—in the area starting Friday. 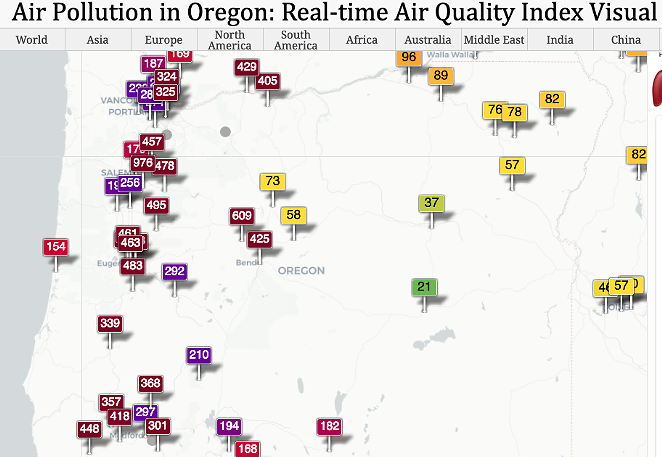 
Air quality will likely worsen in Central Oregon starting Thursday and continue degrading through the weekend. Smoke levels may be unhealthy or hazardous.

When smoke levels are hazardous, everyone needs to take steps to protect themselves.

Protect your health when smoke levels are high:

• Avoid outdoor activities and stay inside if possible. Keep windows and doors closed.

• Be aware of smoke in your area and avoid places with the highest levels.

• Use high efficiency particulate air (HEPA) filters. These can be portable filters or can be installed in indoor heating, ventilation, cooling and air purification systems. You can also create your own air purifying filter by following these instructions for a DIY air filter.

• If you have heart or lung disease or asthma, follow your healthcare provider’s advice.

• Consider leaving the area if smoke levels are hazardous and you have heart disease, asthma or other respiratory conditions. Otherwise, please wait to be directed to evacuate. Pay attention to evacuation notices. If you choose to leave the area, remember to take face coverings and hand sanitizer with you to help protect yourself and others from COVID-19. 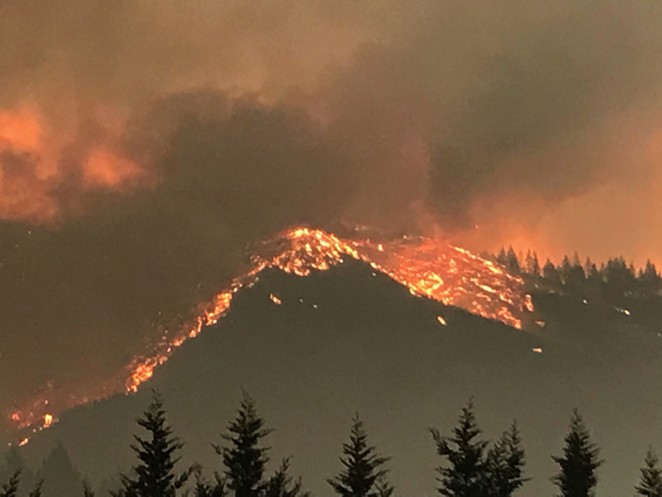