State of the County

Commissioners weigh in on the biggest issues facing Deschutes County 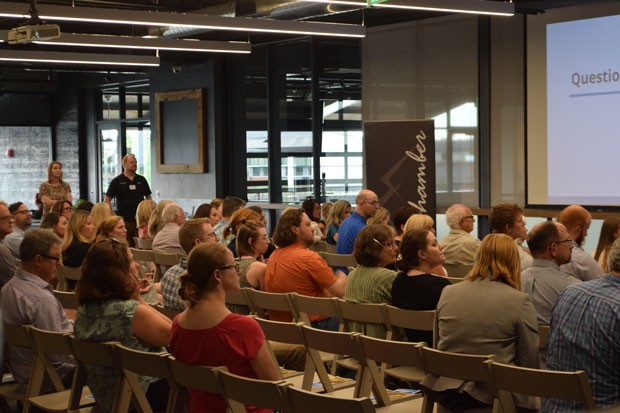 Deschutes County has around 180,000 residents—more than twice as many as official counts in Bend. But county residents, in or near towns including Redmond, La Pine and Terrebonne, have just as many, and sometimes more unique needs.

"Bend gets focused on, but it's a big county," said Deschutes County Commissioner Phil Henderson at the annual State of the County address July 31. Commissioners Henderson, Tammy Baney and Tony DeBone discussed many topics, including the budget, marijuana and land use.

Of county residents, 72 percent are in urban areas, with 28 percent in rural areas. Seventy-nine percent of the county's land is publicly owned—mainly Bureau of Land Management or U.S. Forest Service land—which means at most only 21 percent can be developed.

Each marijuana application is reviewed by the county, and nearby residents are allowed to appeal, because living next to an operation is "not particularly popular among neighbors," Henderson explained.

"It's just been interesting because we fill the room every time we talk about it," DeBone added.

Baney explained that, in the end, it's about sharing community values that meet the needs on both sides.

It's been a few years since a county bond has been included in property taxes, DeBone said, but the commission needs to start looking at any needs that could arise.

"The capital needs in the future are going to start to creep up on us and someday we're going to have to pull the trigger on that," he explained.

At the same time, the county budget includes a proposed fee cut for hotels, restaurants and food carts by 6 percent, and an increase on development fees of 7 percent. The commission will be looking at numerous transportation projects, including potentially adding a roundabout at Old Bend Redmond Highway and Tumalo Road.

Commissioners are also looking at different possibilities for improving O.B. Riley Road where it crosses US 20 and becomes Cooke Avenue, as well as helping people cross the road at Highway 97 in Terrebonne and numerous pavement preservation projects.

The projects would take at least five years to go through the process of zoning and building. The law states the area must be protected for affordable housing for 50 years.

The commission is also looking at rezoning farm and agricultural lands that are no longer able to grow. On the east side of Bend, commissioners say they're working with the state to look at Exclusive Farm Use zone parcels that are now considered unproductive farmland. By changing zoning, housing may be allowed.

"It's trying to reconcile what we value in terms of farmland and agricultural land and also recognize we have housing needs in our community as well," Baney said.

The commissioners said they may also support allowing accessory dwelling units on land designated as farmland.

"If we can't get to the point where you can buy a home for less than $200,000, then we can't have this conversation," Henderson said. "We can't pretend like we're living with no land outside of our cities." Henderson also advocates for relaxed regulation in building, which he says drives up housing costs.

Other projects on the horizon include improving a coverage issue of the communications system used by the county (including 911), the Public Employees Retirement System, solid waste planning for the future, the county's role in housing and legislative priorities.