The Oregon Office of Economic Analysis’ report predicted that the state will take in about $2.7 billion less than these economists expected in March. The long-term effects of a depressed economy mean that the picture may be even worse in budget cycles to come. A full recovery may not come until 2025, according to Josh Lehner, one of the the authors.


The report predicted Central Oregon and the Oregon Coast will be the hardest-hit regions in the state due to a reduction in tourism revenues. tweet this
State revenues depend heavily on personal and corporate income, leading to boom-and-bust cycles of tax collections, relative to other states, according the co-author of the report, state economist Mark McMullen. For the past few years, the State collected more than expected.

The report predicted Central Oregon and the Oregon Coast will be the hardest-hit regions in the state due to a reduction in tourism revenues.


Where have the shortfalls come from?

According to the report, with the state unemployment rate at more than 14%, compared to 4% in March, personal income taxes will shrink by $1.6 billion in this year’s budget. Last June, lottery revenues totaled $726 million for the 2018 budget cycle. With restaurants and bars closed for the last two months, the majority of betting stations also went dark—which may end up costing the state hundreds of millions.

Oregon’s new corporate activities tax, or CAT tax—which funds education—will likely bring in $414 million less than expected because sales have fallen around the state, according to the report.

The only revenues that have come in higher than March’s forecast are those from cannabis taxes, adding an extra $9 million to state coffers.

Despite the dire report, Oregon may be in a better position than other states to weather a recession, according to an April 14 report by Moody’s Analytics. State savings, reserves and federal aid may further cushion the blow. Oregon has $1.6 billion in reserves set aside in the event of revenue shortfalls. It also has $1.1 billion in extra cash because revenues were so much higher than expected in the year before the crash.

The State also received more than $1.4 billion in federal aid from the CARES Act. Right now, Democratic party leaders in the U.S. House of Representatives are pushing to channel more money to states in the next phase of coronavirus legislation. But Republicans—in the majority in the U.S. Senate—have expressed little interest in state bailouts so far.

“The latest forecast for state revenue makes it clear that we have tough choices ahead,” Brown said in a statement. “We will need to tighten our belts … Make no mistake, the budget gap created by this pandemic is too large to bridge without additional Congressional action.” 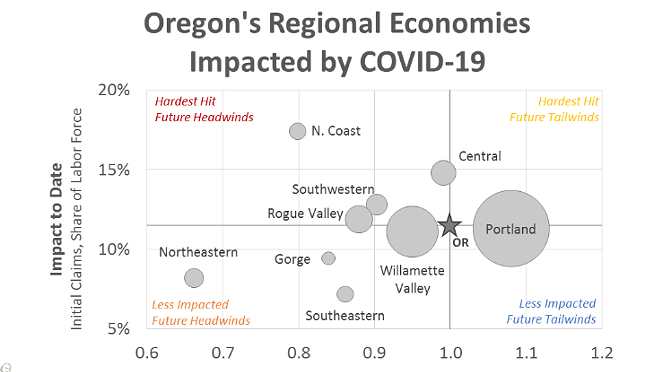 
The new state economists' report will help people in charge of crafting the state’s budgets propose spending cuts to their departments and programs.

Gov. Kate Brown ordered state agencies to craft fictional proposals demonstrating how they would trim 17% off their budgets. These were released last week by the Oregon Department of Human Services and the Oregon State Police and many other agencies.


What does the future hold?


Diving into state reserves is controversial among lawmakers. Some Republicans are predictably declaring it's time to tighten up the state’s purse strings, while Democrats are proposing stimulus spending and more robust welfare programs to help those reeling from the fallout. They’ll have ample time to debate these topics: The governor plans to call the Oregon Legislative Assembly into a special session in the coming weeks.

Rep. Cheri Helt (R-Bend) had this to say on Twitter Thursday morning, "The revenue forecast is very sobering. Just like families, workers & small businesses, the financial health of our state budget has been walloped. I’m committed to working hard to find solutions that create a balance for OR to meet this enormous challenge."

Jason Kropf, who is running for Helt's seat in November said, "Working people are bearing the brunt of this crisis – we must put them first and help ensure they have support to rebuild. No state will escape from this crisis unscathed, which is why it’s critical the federal government provide additional support. We must address the health crisis posed by the pandemic and continue to make smart choices as our region reopens. And our state must do everything we can to protect families and frontline workers by preserving the services they depend on, like the Oregon Health Plan and other vital safety nets."

In the early days of coronavirus closures, when chaos and confusion set in and when weeks passed like years, it was difficult for anyone to predict the long-term effects of business and school closures. State economist Josh Lehner—who also authored the projections report—predicted a swift correction in some parts of the economy as counties begin to reopen, but a much slower recovery in general—one that could take years.

“While this recession is extremely severe—the deepest on record in Oregon with data going back to 1939—it is expected to be shorter in duration than the Great Recession,” Lehner wrote. “The economy should return to health by mid-decade.”

This article will be updated with comments on the State's budget shortfalls from Sen. Tim Knopp (R-Bend) as well as candidates running for those seats.