Stewards of the Snowshoe Trails | The Source Weekly - Bend, Oregon

Stewards of the Snowshoe Trails

As winter approaches, a crew of snowshoe trail maintenance volunteers on the Deschutes National Forest has already been out assessing trail stewardship needs along 23.5 miles of trails. The group maintains spots for snowshoers at various sno-parks along the Cascades Lakes Highway. Having so many miles of dedicated snowshoe trails is relatively rare on national forest lands.

The wintertime volunteers provide an important service by keeping the dedicated snowshoe trails up to par: brushing trails, cutting out blowdown and posting signs—and they all do it for free. The motivator behind the snowshoe trails is Dr. James "Jim" Davis, better known to some as "Dr. Snowshoe." 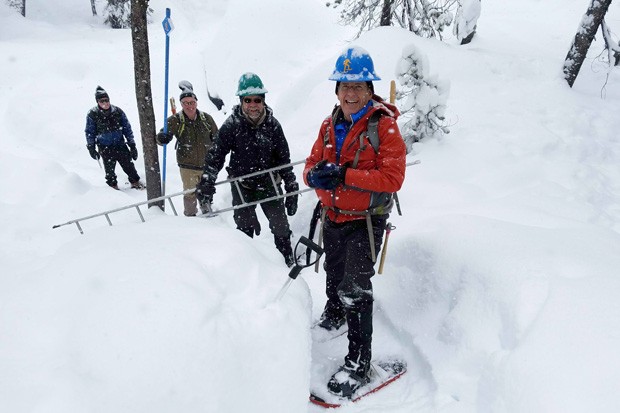 Davis and his wife, Deana, retired to Bend in the late 1980s. A family physician in Milwaukie, Oregon, Davis was an avid skier, cyclist, hiker and snowshoer who would spend some of his winter days exploring the sno-parks along the Cascades Lake Highway by snowshoe. At that time, only cross-country ski trails existed in the areas, and some skiers didn't appreciate the "shoers" tramping on their tracks.

"Jim had a map and compass and he'd follow the terrain," said Fred DeCook, a relative of Davis' who also retired to Bend and became involved in the snowshoe trail project. Davis found that others followed his trails, so he approached the U.S. Forest Service about creating dedicated snowshoe trails at the sno-parks.

The Forest Service agreed, with one caveat: Davis would do most of the work.

“I have noticed that the popularity of snowshoeing has increased exponentially over the last few years, not just on the Deschutes but on many other forests.” — Jessie Larson tweet this

Davis recruited friends, and with some input from the USFS, the group began with the loop at Virginia Meissner Sno-Park. Volunteers would follow the terrain and flag a route they thought would be interesting to other snowshoers. DeCook said after the route was flagged, the Forest Service would inspect it and make any recommendations before approving the trail. Then the volunteers would install trail markers and keep the trail clear of deadfall. Though Davis initially paid for sign supplies out of his own pocket, the Central Oregon Nordic Club pitched in to support the work and purchase aluminum nails and trail markers.

After Meissner, the group had installed trails at Swampy, Edison, and Todd Lake sno-parks by 2008. At the time, and it may still be the case, the DNF was the only national forest with a dedicated snowshoe trail system.

With the support of the CONC and a solid volunteer base, Davis decided he needed to pass the maintenance torch on, as he was then in his early 80s. Bob Timmer, who met Davis in 2013, agreed to head up the crew. 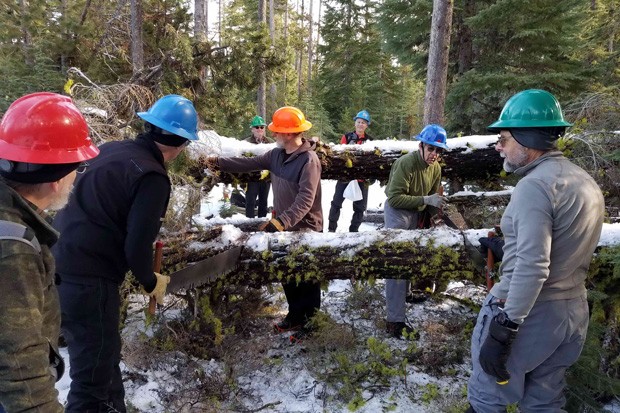 "Through the years, there have probably been some 60 folks that have volunteered," said Timmer. Most of the volunteers were older retirees, and some have slowed down due to their age. "It is tough carrying a cross-cut or pole saw on snowshoes," added Timmer. Though the Forest Service trail crew helps out when they can, most of the work is done by the volunteers.

Timmer keeps a log of the hours and work done by the volunteers. In addition to a pre-season sweep that identifies work to be done, weekly outings during the winter season focus on new blowdowns or other issues. The crew maintains the trails to Class 2 standards, meaning clearing is limited to the removal of blowdown and brush that extends 12 inches or more above the ground. During low-snow levels, snowshoers may find they need to step over downed logs left in the trail for this reason.

Not satisfied with just regular trail clearing, Timmer and his core of a dozen volunteers or so installed You Are Here maps at junctions along the Meissner snowshoe loop in 2016. The maps reflect the increased usage of the trail by "first-timers," and are especially helpful since paper maps are no longer available at trail kiosks. The group expanded these maps to Swampy's Porcupine trail in 2018.

"I have noticed that the popularity of snowshoeing has increased exponentially over the last few years, not just on the Deschutes but on many other forests," said Jessie Larson, DNF trail volunteer coordinator. "I think people enjoy coming over to the Deschutes because CONC does such an amazing job at maintaining our trails."

Next time you're out snowshoeing at an area sno-park, give a nod to the man who established these trails and the crew that keeps them open. Better yet, donate or volunteer to help out. Visit the Central Oregon Nordic Club at conordicclub.org for more info.