A Q&A with The Seshen's bassist and producer, Aki Ehara

The Seshen is a six-piece band from the Bay Area. The group creates a plethora of groovy rhythms, taking inspiration from electronic music, pop, R&B, rock and sometimes more. One song can sound like you're playing a video game and the next like you're floating through space. One thing that remains constant: the music is always fun and eerily beautiful. 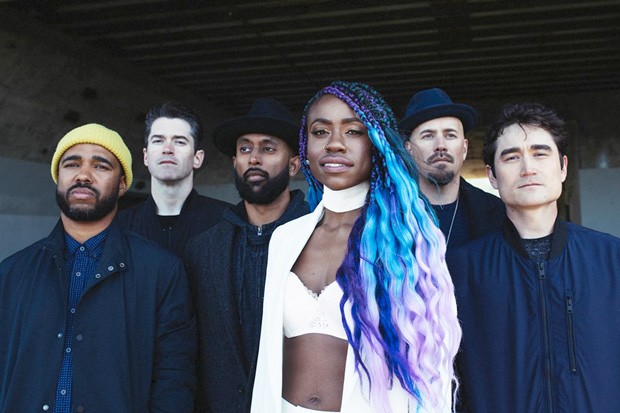 Aki Ehara, the producer and bassist for the band, chatted with the Source Weekly ahead of the band's first show in Bend. The bill consists of Rituals of Mine and locals This Island Earth, which will make for a very complimentary palette of electronic sounds. Learn more about Ehara and The Seshen with this Q&A.

Source Weekly: So how did you get your start in music?

Aki Ehara: I got my start initially playing in punk bands as a teenager. There's a pretty famous punk club in Berkeley called 924 Gillman, which is where Operation Ivy and Green Day and Rancid kind of got their start. Me and Kumar, who does samples and electronic stuff in the band, we grew up going to shows there and our band had played there and stuff. Getting involved in that scene and the whole DIY ethics of it was kind of my beginning in music.

SW: From there, how did The Seshen end up forming?

AE: We [Aki and Lalin, the lead singer for The Seshen] started writing together a bit. She's Haitian-American, and there was, I think was 2010, there was a big earthquake there and we wanted to do a benefit party. We had done a few house parties together where there was kind of some loose jamming and we put a band together from that. It kind of went from there, being more jammy and then the more we kind of got serious about it and worked on things it kind of became a project with more intention. It started there and we've had a few people come and go, but it's been the same lineup for like six years now.

SW: Do you think that longevity helps within the lineup? Especially with live shows and chemistry?

AE: Yeah, I definitely feel like that! It's interesting. There's definitely something different that happens with bands—it's something, having played with Hiatius Coyote and seeing them play live many times, there's something about a band that is actually a full-on band and not using hired guns or whatever. There's definitely a different chemistry having those relationships longer and understanding people's playing in a deeper way.

SW: As far as evolution goes with the current lineup, how do you think you guys have been able to grow since you got together?

AE: I think just stylistically there's been shifts. I think we've all grown artistically as well. Continuing to explore and really trying to not stay stagnant or tethered to any particular sound. We'll always sound like us in a number of ways, but we're always pushing for an evolution and trying to dig deeper creatively.

SW: Are you guys working on a project right now?

AE: So, we are going to release an album... hopefully in February. That's done. We're kind of always working on stuff. On this particular album though, there's definitely going to be some different sounds. There's string sections which we haven't done before. There's more rock influences going on. There's still strains of ethereal production, but this album is zooming in a bit more on the granular rather than being like spacey, trippy music. I mean, it's still kind of trippy—just in a different way [laughs].