The Helio Sequence returns to Bend for the Apres Ski Bash 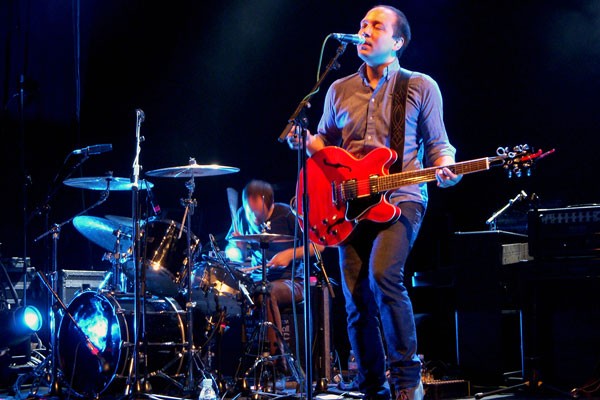 Odds are, over the last several years, you've seen the indie rock goodness performed by one of Portland's favorite bands, The Helio Sequence. The band has made it a tradition over the last three years to perform outdoors at The Commons, as part of the Downtown Apres Ski Bash series.

"It's almost like a tradition at this point," says vocalist and guitarist Brandon Summers. "It's the third year they've asked us to come play. We like it because it's a nice change of pace. It's outdoors in the cold—it's such a unique event."

After performing outside for the past two years, Summers and bandmate Benjamin Weikel have gotten their performance down to a science. Summers will have a high-powered torch pointed at him. Weikel, meanwhile, moves around so much as a drummer that he stays pretty warm.

"It's totally off the beaten path of music we've released before. Writing video game-style music, orchestrating stings, French horns and then the performance aspect was something completely different than what we've done before." — BRANDON SUMMERS, THE HELIO SEQUENCE tweet this

"It's better than when we played a show in Orlando recently and the air conditioning broke. Benjamin was ready to pass out," Summers recalls.

When it comes to new music, The Helio Sequence has been keeping busy, but not necessarily in the traditional way. The band recently collaborated with famed Portland advertising agency Wieden + Kennedy to release a soundtrack to an online game that helps a robot escape the Internet.

"Since we were kids we've self-recorded and been really interested in the technical, studio side," Summers says. "Earlier this year, I had this epiphany that it'd be really fun to do some commercial work."

The band reached out to several companies in Portland and were pleasantly surprised with the response. Wieden + Kennedy bit, recruiting the band to record and perform the soundtrack to their new game during a six-hour live streaming event.

"It's totally off the beaten path of music we've released before," Summers says. "Writing video game-style music, orchestrating stings, French horns and then the performance aspect was something completely different than what we've done before."

Working on a soundtrack to a video game proved to be similar to recording a tradition album, but the music itself had a more electronic, video game vibe according to Summers.

"Each different room the robot was going through had contrasting topography," Summers says. "Each room was different, but the songs had to hang together. We stretched that palate sonically and sound wise and found common themes that can tie it all together. It was very much like writing a record."

Speaking of writing a record, Summers reports that the duo is just beginning work on their next album, with 10 demos completed. Weikel also has a handful of recordings. They plan to record a more conceptual album next, ideally coming from a focused angle rather than writing a bunch of songs and seeing what they can pull together.

"We're hoping to just stretch things out mood wise," Summers says. "We want to go to some places that we haven't before on records in the past."

For Summers personally, music is about relating to people. Summers and Weikel, together as The Helio Sequence, believe in following the inclination inside of yourself and seeing where it leads.

"When I listen to music, I feel like it's this privilege you have, whether recorded or live," Summers says. "Whoever you're listening to is opening up to you and it's a chance for you to relate to them. It's a subconscious expression of what's going on inside of people. When we're thinking about our music, both Benjamin and I, following that inclination inside of you is leading. Like any process in life, it can be vague at times, but trust it and let it lead you. That's how our process has always been."