When 2nd Street Theater closed its doors shortly before Platypus Pub was torn down to make room for another Starbucks, it felt like that little burgeoning Bend Central District was dismantled before it really lived up to its full potential. With Humm Kombucha there and the astoundingly delicious Manzanita Grill, the area has enough touchstones to really make a go at being a new district that tourists and locals alike would frequent regularly.

Enter Open Space Event Studios, a "contemporary, multi-modal rental and collaborative event space serving arts, business and culture." It's a novel idea to have a centralized location that can morph from a concert venue, to hosting theatrical productions, comedy shows, art galleries or EDM dance parties, while also being available for business seminars and everything in between. It seems like whenever you're asking an artist what they are working on next, their biggest worry is finding an actual venue. Open Space offers a 1500-square foot space for performances or presentations, as well as a 350-square-foot space ideal for meetings and workshops. In addition, there's a small photography studio that doubles as a podcast space for the owner.

Open Space Event Studios is owned by Charlie Thiel, a transplant from South Carolina and Bendite for the last eight years. With a deep background in theater, filmmaking, writing and photography, Thiel has also been on the board of BendFilm for six years as well as helping build the co-working space, The Wilds.

When Thiel saw that the building that once housed 2nd Street Theater was for sale, he was already looking for a venue that could be used as a medium-sized space for the meeting of arts, culture and business. He renovated the limiting black box-style theater space into a flexible floor plan that can be used as a location for "theater performance, presentations, workshops, pop-up shops, film and photography production, film viewing, live music and dance parties."

Leah Rutz, part of the operations and creative side to Open Space, knows how, ahem, central, that area is to the growth of Bend. "Open Space sits at a pivotal intersection of town," says Rutz. "It is in the heart of the Bend Central District, which is the home of the burgeoning urban growth that will connect west and east Bend. It is our hope that not only can we be a physical fixture for the evolution of our city, but that we also remain a metaphorical intersection for equality, free expression and grassroots cultural development. As hard as we are working toward our vision, the beautiful thing about Open Space is that it will be organically molded and shaped by the community members that put it to use." 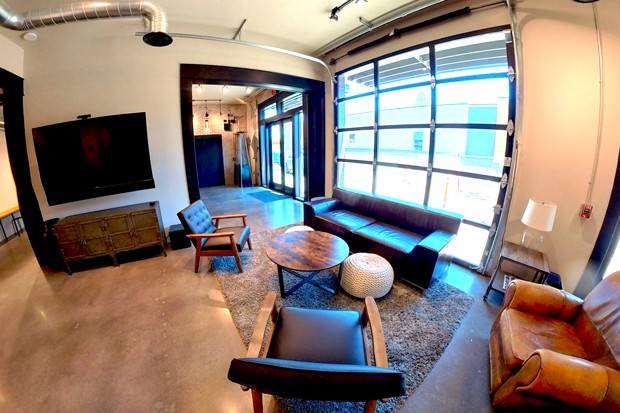 With the amount of growing Bend has gone through just over the last two years, having a space this flexible could really influence the artistic growth the city goes through, as well. Aside from Volcanic Theater Pub, there aren't many mid-sized venues for music and not many spaces at all for independent artistic voices in general.

"We are motivated by motivated people," says Rutz. "We live in a town that is ripe with talent and energy and we see our mission as serving those who are excited to produce opportunities for themselves and their communities. We are currently booking all kinds of theater from multiple production companies in town; we have comedy and improv performances lined up; we are honored to be hosting Bend Design Conference this year as well as the BendFilm festival. We have a variety of independent workshops scheduled and are hosting meetings for Opportunity Knocks, the Bend Central District Visionary Board and the local chapter of YIMBY (a local chapter of an organization that advocates for affordable housing development). We look forward to what is to come and hope to not only serve our partners and clients but to also facilitate a network of talent and collaboration."

Making Bend feel like it's more of a collaboration and less of a conglomeration is key to keeping those of us who actually live here, still here. It's not easy to get things built in Bend (unless you're a Starbucks) and working with the City can sometimes be like living in one of Kafka's worst nightmares.

Thiel puts it better than I ever could: "I have poured blood, sweat, tears and money into making my vision a reality, which is exactly what the City wants. I want the City to recognize and encourage what I and other citizens like me bring to the table." With a space where we can all come together, maybe now they'll pay attention.