Officials are publicly debunking rumors that anti-fascists started Oregon's deadly wildfires. In Deschutes County, Sheriff debunks rumor about someone starting fires. It was vomit, not a fire they found.

September 11, 2020
3 comments
Since the advent of Monday's massive fires in Oregon, rumors have flown around, linking a loose group of anti-fascist activists to a rumored coordinated effort to intentionally start the fires. Meanwhile, one arson rumor Friday morning in Deschutes County led deputies to investigate—only to find vomit, not fires, at the reported scene.

This morning, the Federal Bureau of Investigation put out a statement, debunking rumors about Antifa arsonists.

"FBI Portland and local law enforcement agencies have been receiving reports that extremists are responsible for setting wildfires in Oregon. With our state and local partners, the FBI has investigated several such reports and found them to be untrue." tweet this
The statement reads:


"FBI Portland and local law enforcement agencies have been receiving reports that extremists are responsible for setting wildfires in Oregon. With our state and local partners, the FBI has investigated several such reports and found them to be untrue.

"Conspiracy theories and misinformation take valuable resources away local fire and police agencies working around the clock to bring these fires under control. Please help our entire community by only sharing validated information from official sources."

In addition, this morning, Oregon's Public Utility Commission issued a statement, saying it was investigating the possibility of downed power lines causing some of the fires currently burning in Oregon. 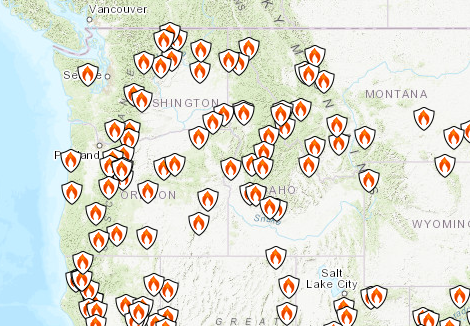 This from the Oregon PUC:

"At this point the PUC has no information attributing any specific wildfire to Oregon’s regulated utilities," said PUC Chair Megan Decker. "As with every major fire, full investigations will deliver the facts that we need to determine root causes, including information about whether utility lines were a primary ignition source. Accurate, objectively determined facts are what we need to keep Oregonians safe from rapidly evolving fire threats in a changing climate."

"In addition to reviewing the results of fire investigations conducted by others, which ultimately will determine the cause of each wildfire, the PUC is committed to rapidly incorporating any lessons that may be learned from this unprecedented weather event into our ongoing work on utility wildfire mitigation in preparation for future extreme weather events."


Meanwhile, the Deschutes County Sheriff's Office posted this on its Facebook page this morning, debunking another report of an alleged arson in Redmond:

"ACCURATE INFORMATION REGARDING POSSIBLE ARSON ATTEMPT OFF HWY 126 THIS MORNING

"At approximately 8:20 am this morning, deputies were dispatched to a second hand report of a possible arson attempt in the 1200 block of NW 101st Street near Redmond. A witness reported seeing a male attempt to start fire in some grass. Deputies responded and attempted to locate the vehicle, a red Subaru wagon, as it left the scene. They also responded to the incident location to investigate and recover any evidence. The vehicle was never located and the investigation at the scene found only a likely pile of human vomit. No burnt grass or any other evidence of a fire was located. Please continue to follow official sources for accurate information on fire activity in Deschutes County."

So in that case, it was someone puking, not someone starting fires.


For those looking for the most up-to-date information on evacuations, the Oregon Office of Emergency Management's interactive database has the most recent information.

The Central Oregon Fire Information website offers daily updates on fires in the region, and recommends people text "COFIRE" to 888-777 to receive wildfire and prescribed burn text alerts for the area.

People can donate and help the evacuees directly at the website for the Red Cross Cascades Region.

Evacuees should register on the Red Cross' Safe and Well website to let family and friends know their whereabouts.  See our earlier fire update from Friday morning here.