April 24, 2020
2 comments
From a sick person allegedly spitting on a local cop to give him COVID-19, to a drunken California CEO allegedly attacking a female Uber driver in Bend, in these unprecedented times, bizarre crimes are unfolding in our own back yard.

Early Thursday morning, the Bend Police Department found evidence that an arsonist set fire to El Sancho Taco Shop and Enterprise Rent-A-Car. The businesses are within a block of one another off NE Third Street in Bend.

Bend PD identified the suspect, Demetrios Tsitsilianos, 37, of Athens, Georgia, through video surveillance, and took him into custody at 8:30 am Thursday, according to a statement from BPD. Police took Tsitsilianos to St. Charles Bend due to minor burn injuries. Once he's released, BPD will move him to Deschutes County Adult Jail on the charges of attempted arson, manufacturing a destructive device and criminal mischief.

Bend Fire & Rescue, along with BPD, responded to the fire at Enterprise Rent-A-Car first at 4:28 am Thursday. The suspect set the deck on fire in an attempt to ignite a propane tank they had placed on the deck, cops said. The tank never caught fire, but BPD estimated the damage to the deck was $1,000, according to BPD’s press release.

Bend Fire & Rescue arrived at El Sancho Taco Shop shortly after responding to the first fire, but a bystander had already extinguished it and police determined he was not the suspect. The alleged arsonist also threw a concrete umbrella stand through one of the restaurant’s windows. Again, police found canisters of propane on the deck of the restaurant which never ignited, and police estimate $1,000 of property damage to the business. 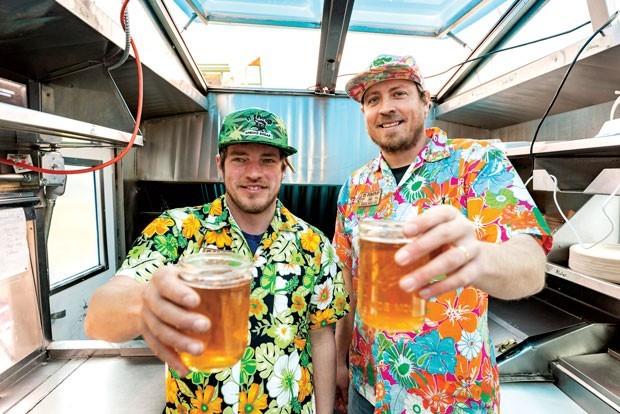 "I do not know who the rescuer was but I'd like to find out and buy them a beer," Cordes said. "Not much damage besides a broken window and a mess to clean up. We have the best staff, everyone rallied and took care of the shop and continued to serve food. I feel very fortune for the amazing team we have, they carry us through all sorts of challenges."

El Sancho Taco Shop was named "Restaurant of the Year" by the Source dining team in 2019, and voted Best Mexican by Source readers in our Best of Central Oregon 2019 edition.