Both parties agreed that patient care was their ultimate priority

Technical employees at St. Charles Medical Center went back to their jobs on Monday, after representatives from St. Charles and Oregon Federation of Nurses & Health Professionals came to an agreement to end the strike and re-ignite contract negotiations. The employees—which include therapists, technicians and technologists working for the health systems—joined a union in late 2019 and have been working to forge a new contract with their employer since then. Employees cited pay and “issues of disrespect” as reasons for negotiating the contract. They spent over a week on the picket line before agreeing to end the strike on March 12. 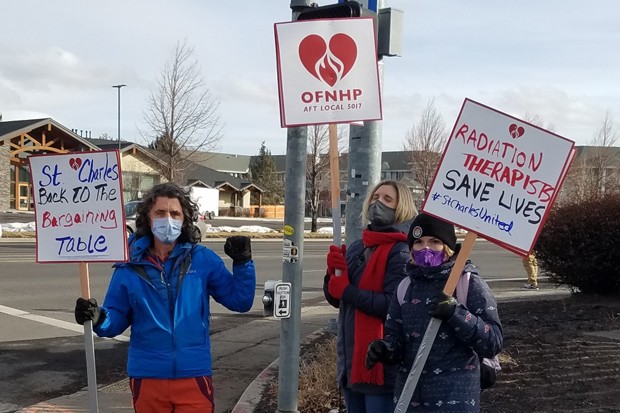 “The agreement came together as both parties believe patient care is and should be the top priority, the strike has been distracting and difficult for all involved and it is in everyone’s best interest to return to the table and continue bargaining,” reads a joint press release from St. Charles and OFNHP.

Representatives from the union and St. Charles are working with a federal mediator to secure a new contract. They’ve set a deadline of March 31 to finalize the contract.

“The federal mediator has been very helpful and will continue to guide bargaining sessions through the end of the month,” the press release stated. “We look forward to building on this partnership to approach our collective challenges with dynamic solutions that will result in a fair contract.”

"This unit of frontline caregivers has been bargaining their first contract for more than a full year, and the hospital has yet to agree to critical provisions about pay and other working conditions," the OFNHP described in a Feb. 23 release. "In addition, the hospital broke federal labor law by unilaterally changing pay for some healthcare professionals. Over the weekend of January 31st and February 1st the techs held an informational picket at the hospital with mass participation. On December 3, 2020, the hospital canceled bargaining and only agreed to return to the bargaining table following that picket. After subsequently agreeing to mediation, management canceled all future bargaining when they were given notice of a strike."

Representatives from St. Charles believe that strike notice was unlawful.