Around 150 technical employees at St. Charles Medical Center plan to walk off the job on March 4, hoping to settle an ongoing contract dispute with their employer. Representatives from the Oregon Federation of Nurses and Health Professionals, along with attorneys for St. Charles met in federal court March 2, after St. Charles filed a suit against the union in an effort to keep workers from striking. Technical employees—which include therapists, technicians and other technologists at the hospital—have been negotiating with their employer for higher wages and working conditions they call "disrespectful" for over a year. The employees joined the OFNHP union in 2019 and began negotiations soon after. 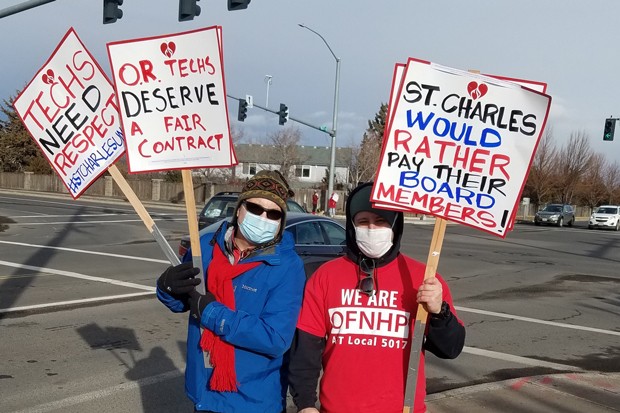 "This unit of frontline caregivers has been bargaining their first contract for more than a full year, and the hospital has yet to agree to critical provisions about pay and other working conditions," the OFNHP described in a Feb. 23 release. "In addition, the hospital broke federal labor law by unilaterally changing pay for some healthcare professionals. Over the weekend of January 31st and February 1st the techs held an informational picket at the hospital with mass participation. On December 3, 2020, the hospital canceled bargaining and only agreed to return to the bargaining table following that picket. After subsequently agreeing to mediation, management canceled all future bargaining when they were given notice of a strike."

Representatives from St. Charles believe the strike notice was unlawful.

"The National Labor Relations Act requires that when a first contract is being negotiated the union must provide at least 30-days' notice of the contract dispute to state and federal mediation agencies so the dispute may be resolved without a work stoppage," said Rebecca Berry, vice president of Human Resources for St. Charles in a release March 1. "As a result, we believe the strike notice is unlawful and the NLRB [National Labor Relations Board] is now investigating that issue."

But on March 2, the judge denied St. Charles' injunction, saying the court did not have the authority to issue the injunction, due to the fact that the issue is under review by the NLRB.

"We had hoped the courts would give us additional time to get back to the bargaining table with the Oregon Federation of Nurses and Health Professionals so that we could reach a contract agreement without an impact to our patients," said Aaron Adams, president of St. Charles Bend in a March 2 release. "We are disappointed in the outcome but will continue our preparations to hire and onboard replacement workers and minimize disruptions to our patients and community."

Union representatives believe St. Charles is putting all of Central Oregon at risk by being "unwilling to negotiate a settlement in advance of the strike date."

"So far the hospital has not shown their ability to fill vacancies created by the strike with replacement workers, meaning that it is uncertain how they will operate the hospital come Thursday," the union wrote in a March 2 release. "Right now, the employees are planning to walk off the job Thursday morning, unless the hospital returns to the table and settles the contract in the preceding hours. The strike was authorized by 94% of the medical therapists, technicians and technologists at St. Charles, an unprecedented number."

Community members are planning to join union members on the picket line at St. Charles Medical Center at 10 am on March 4. Financial support for striking workers has also been set up via a GoFundMe fundraiser, titled "OFNHP Cares – Member Hardship Relief Fund."