Searching for the "Phantom Thread" 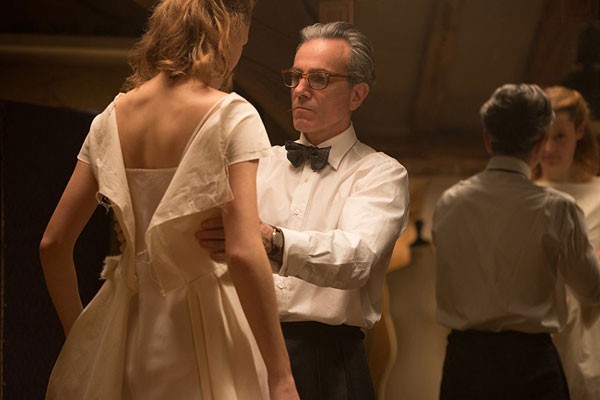 Pardon me a very obvious analogy: There's a lot going on in "Phantom Thread." So much, that if you pull one delicately frayed string, it unravels 30 more passageways, showing how deftly woven the entire underlying structure is. And just like the secret messages its main character sews into the lining of his garments, there are hidden depths to this masterpiece that could never be discovered in one simple viewing.

On its surface, "Phantom Thread" tells the story of Reynolds Woodcock, a renowned couture fashion designer in post-war London. He lives with his sister, Cyril, in their gorgeous house and has a very specific routine he must go through each day to feed his genius and catch inspiration.

He's a self-proclaimed "confirmed bachelor" and treats his girlfriends as combinations of muse, mother, servant and window dressing... until he becomes annoyed with them, firmly but compassionately removing them from his life. While unwinding in the country, Woodcock meets Alma, a waitress instantly fascinated by him, who becomes the latest accessory in his aesthetically beautiful life.

This is when we realize that the story isn't really Woodcock's, but Alma's. Watching her navigate Reynolds as he dances between obsession and a clinical distance from her is the purest cinematic joy of the last several months and an absolute masterclass in acting, screenwriting and directing. "Phantom Thread" isn't a story about a poor young woman caught up with a powerful and abusive man; instead, it's about two very specific and difficult people who have found each other when all sense of reason says it should be impossible.

Obviously, Daniel Day-Louis is flawless as Woodcock. He inhibits the strange and persnickety man with such humanity and grace that even at his most terrible and imperfect, we always empathize with the tortured genius, still desperate to please his long-dead mother. If this is the final performance of his career, then it's a beautiful and delicate note to go out on.

The truly incredible find here is Vicky Krieps, giving Alma such a complicated inner life that we constantly struggle to find meaning in her actions, even as we connect to them. Just when the audience begins to wonder why she stays with Woodcock, we see exactly what she's getting from him. That moment is absolutely astonishing.

Paul Thomas Anderson has added another masterpiece to his body of work, which after "Boogie Nights," "There Will Be Blood," "Magnolia" and "Punch-Drunk Love," makes him one of, if not the, finest filmmakers of his generation. The endless dolly shots and swooping camera work of his earlier films are gone here, instead shooting "Phantom Thread" like a formal exercise in aesthetic grace. His compositions create sumptuous and exquisite beauty while remaining cold and almost neutral to his subjects, discarding the warmth he reveled in with 2014's "Inherent Vice."

"Phantom Thread" is the Anti-"Fifty Shades of Grey." It takes a dollop of kink and a splash of fetish, wraps it in complex human behavior and leaves the judgements to the plebes. This is what it looks like when you see two people who really deserve each other on a level completely alien to the people outside the entanglement. The film is powerfully erotic without a second of on-screen sex and deliriously romantic with barely a shared kindness throughout. These contradictions are the weavings of relationships, the ones we have with ourselves and with others. "Phantom Thread" not only gives those contradictions context, but pure cinematic life in every frame. The film isn't just a movie to be watched, but a body to be worshipped.