My favorite festival of every year is the Little Woody festival. This year it was a walkabout. So much fun—and included a "bonus" stop where you could sample whiskey from New Basin Distillery.

I love me some whiskey, and when I saw a bottle that said, "Strongest," "13 year single barrel," and "133.4 Barrel Proof," I was extremely intrigued. I know.... you're saying, "but you write about beer.." and I get that. I do USUALLY write about beer, but I am a connoisseur of all things craft, people! I enjoyed my taste of "Strongest" (an American light whiskey) so much that I decided I had to buy a bottle. Unfortunately, I didn't make it back before closing time (because beer), so I decided to head to Madras and go on a distillery tour. 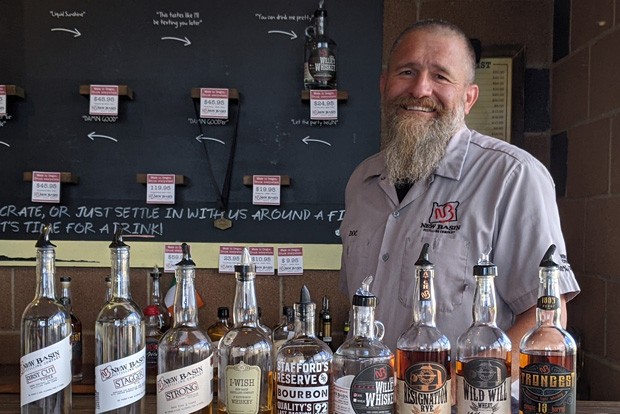 This tour was amazing. I was enthralled by the knowledge I was soaking up, along with all the whiskey. I tasted everything... vodka, gin and all kinds of whiskey. This was the most informative distillery tour that I've ever been on. Distiller Rick Molitor was knowledgeable and able to break the process of distilling down in a way that was both interesting AND easy to understand. He shared that he was a school superintendent in Madras before opening up the distillery with his partners. It makes sense, because I really felt that I was learning (while drinking) in the funnest way possible (Rick... get out that red pen for this sentence). I really don't want to give away too much though, because you really need to enjoy this tour for yourself. It's a real treat.

I'm going to get back to that whiskey now. For those of you who've been around a while, you might remember that New Basin Distillery distilled a whiskey called "Strong'er" for the eclipse in 2017. THAT whiskey was 97 proof. They kicked that up a notch with Strongest, as I mentioned earlier with a proof of 133.4, which equates to 64.7% alcohol by volume. The first thing I noticed when sipping this whiskey was the delicious vanilla—like a lovely, toasted, artisan marshmallow. There's a heat to it, because it's whiskey and that's what whiskey does, but it's nothing like you would expect. This whiskey is dangerously smooth, but at $119 a bottle, pour yourself a single, neat, and sip on it for the evening. I put my money where my mouth is (or my fingers... on the keyboard?) and bought a bottle. My bottle is labeled Batch #1, Bottle #30 of 180. This tells me that it is a limited release. I will pop this bad boy open next month on my birthday to share with my family (but I will be controlling the pours).