Started by students, the OSU-Cascades climbing club has exploded in size, taking many podium spots in competitions

What started out as a simple idea—having OSU-Cascades student fees pay for a climbing club—has quickly grown in popularity that neither the founding members nor the University saw coming. 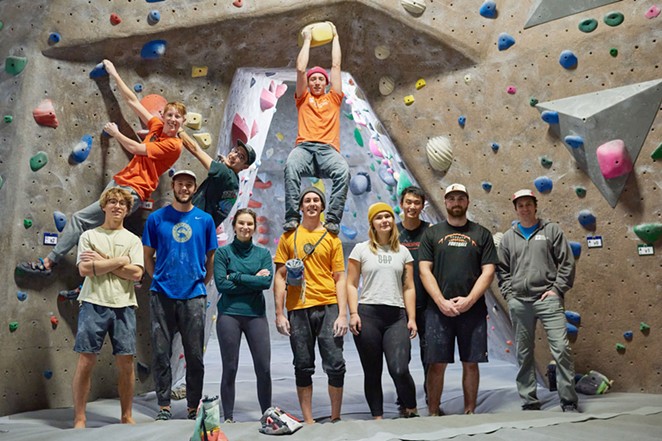 "We started the club in January 2018 after I took PAC class (Physical Activity Course) for rock climbing," said OSU-Cascades student Connor Park. Park enjoyed the course but didn't have the money for a membership at the Bend Rock Gym. "I was sitting in class with my buddy, Jordan Jones, and asked if he wanted to start a climbing club." Park, Jones, Gabe McFarlane, and Madeline Kier reached out to the school to charter the Rock Climbing Club with the mandatory four-student minimum. To start, the club obtained around $11,000 from student fee money to cover entrance fees and equipment rentals at the gym.

"The club hosted an event for Welcome Week in the fall of 2018 with an afternoon outing at the Bend Rock Gym as an intro to climbing," said OSU-Cascades Director of Student Life Kristen Martin. "After that, the club went from a handful of students to over 140 by winter. Nobody had seen anything like this growth here at the university."

Park and McFarlane credit the popularity to the social and friendly atmosphere generated by the members during the weekly Wednesday night climbing sessions. "A lot of people would bring a friend or two with them and they'd all have fun," said McFarlane. "Next time, those friends would bring someone else and the club just grew from there." The club budgeted for about 30 students to attend each climbing night, but 50 to 60 students were attending.

“During competitions, It’s just you against the wall and the problem.”—Connor Park tweet this
As the club grew, an interest developed in competitive climbing. "A couple of us competed at the Boulder Bash here at the gym and just loved it," exclaimed Park. Encouraged by their success and the discovery that OSU-Corvallis had a club sports climbing team, the group formed its own team which competes in the Northwest Collegiate Climbing Circuit, made up of colleges and universities in the Northwest. Last year, the team earned seven podium spots.

"During competitions, it's you against the wall and the problem," explained Park. (In bouldering, a "problem" is the route the climber follows.) "When you're climbing you don't feel that competition against other climbers."

The Rock Climbing Club Sport Team has 21 members. "The school is very supportive of the club team and covers all our travel and competition fees," said Park. "We've talked to some other clubs from other schools and they don't get as much funding." Members are asked to commit to Friday workouts and attend at least three competitions, according to McFarlane. 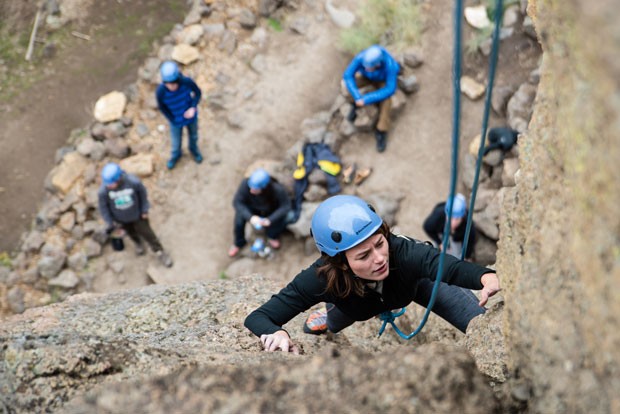 Prior to Bend Endurance Academy being brought on board, the students were coaching themselves. "Collegiate level climbing is a pretty new sport, so a lot of the groups are all student-led," explained BEA Assistant Climbing Director Brady Kendrick. Kendrick had been watching the team over time at the gym, giving them pointers and suggestions. "We thought it would be neat if they did start getting instructional training so that they would even be better." Kendrick and Mike Rougeux, BEA climbing director, meet the team on Friday mornings and help prepare them for competition-style climbing.

That instruction was invaluable to team members who traveled to Spokane, Washington, last November to compete in a USA Climbing regional competition. Six of the OSU-Cascades members placed in the top 10, including Megan Larson (4th) in the women's division and George Tanasse (3rd), Emmerson Donnell (4th), Connor Park (6th), Sam Stroh (8th), and Gabe McFarlane (9th) in the men's collegiate division. Next up is nationals held in Englewood, Colorado, in April, an event broadcast on ESPN2.

Another goal of the club is to entice prospective student climbers to attend OSU-Cascades for the academics and climbing opportunities. "We would love to keep moving forward and eventually be an official sports team as opposed to the club sport we are currently," said McFarlane.