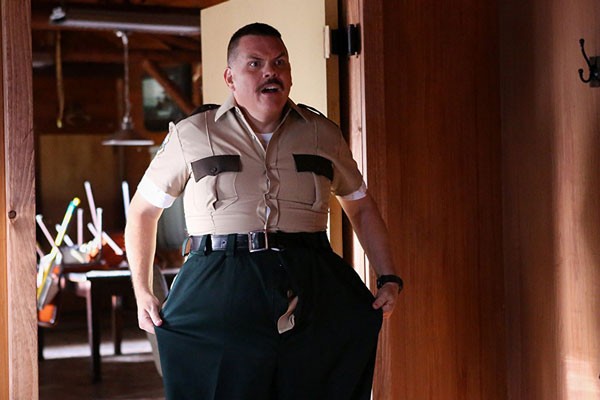 Watching "Super Troopers 2" made me feel crazy—as if everything I'd ever thought about film was thrown under the bus and proven to be nothing more than the insane fecal scribblings of a madman layering the walls of his padded cell.

As the sold-out auditorium laughed at almost everything, I looked at my best friend (sitting next to me, also in wild-eyed horror) and wondered if we could escape before the audience noticed our differences and started pointing and screeching at us like Donald Sutherland in "Invasion of the Body Snatchers."

While waiting in the massive line to get into the sold-out showing, my friend and I witnessed three separate moments involving homophobia, racism and sexism, not putting us in the greatest mood for the movie. Was this the modern audience for "Super Troopers," 17 years after the cult classic stoner original? Was I going to need to start using "snowflakes" as a pejorative before I could watch the movie?

Believe me, I get it. The original was a loosely tied together series of dick, fart and stoner jokes that worked because Broken Lizard (the comedy team behind "Troopers," "Beerfest" and "Club Dread") played a somewhat lovable group of underdogs. It's an intermittently funny movie that became a cult classic because of the novelty of seeing cops be lovable stoners and because of the absurdity of the humor.


"Super Troopers 2" creates a new style of comedy that I dub "Post-Humorous." Definition: Laughing uncontrollably at something that seems like it should be funny, even if it isn't. tweet this

"Super Troopers 2" manages to forget everything that made the original funny. The random eccentricities of the first film meant anything could happen from one scene to the next. Instead of cashing in on that unpredictability and updating it to somewhat modern sensibilities, the script invents a lame excuse to plop the troopers down in Canada to tell a fish-out-of-water story.

The ex-Vermont Highway Patrol officers are brought back from being fired (because they killed Fred Savage during a ride-along) to help transition a small Canadian town being annexed into the United States. So, I shit you not, the film is essentially 90 minutes of Canadian jokes, French jokes and French-Canadian jokes. Stale ones. Jokes that were old when they appeared on "How I Met Your Mother" several years ago. Jokes that died after "Strange Brew" told them in 1983.

That's the thing: anything can be made funny again. Watching a bunch of middle-aged Americans mock Canadians for their accents and being friendly could have possibly worked if the jokes did, but it all feels so lazy and uninspired. The troopers come off as bullies and the xenophobia, gay panic and sexism don't play as well in 2018 as they apparently did in 2001.

Yet my friend and I were the abnormality. The audience erupted in laughter at every little call back to the original and each third-grade fart joke. Maybe we're just too old and cranky to enjoy the celebration of stupidity and blind nationalism that the film so pathetically plaudits. Or maybe this is the least funny movie I've ever seen in the theater.

"Super Troopers 2" creates a new style of comedy that I dub "Post-Humorous." Definition: Laughing uncontrollably at something that seems like it should be funny, even if it isn't. Please welcome our new Post-Humorous overlords.