Sunk by a Rattlesnake Bite | Outside Features | Bend | The Source Weekly - Bend, Oregon

Sunk by a Rattlesnake Bite

The piercing account of a Memorial Day Weekend raft trip 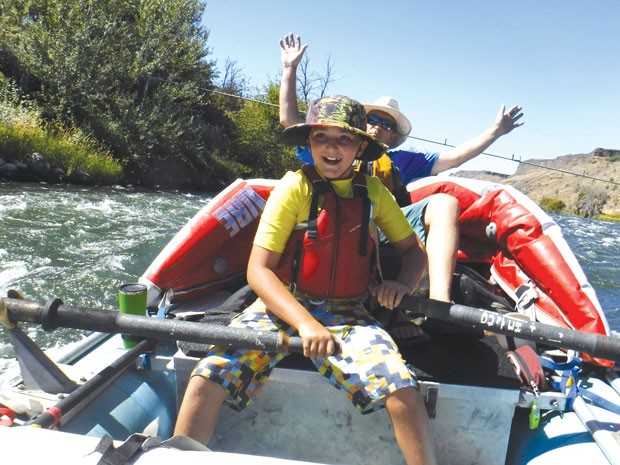 Shortly after a classic rattlesnake warning talk, Kirsten Mohill Heron watched her son, Jake, scramble up a talus embankment on the Lower Deschutes River. The two were on a 20-person raft trip below Shearers Falls at Harris Campground, 12 miles from the Columbia River confluence. Once atop, Kristen saw Jake startle, turn around and rewind his steps, scraping under a barbed wire fence and returning to her side.

"We spent 25 minutes questioning whether he got bit," explains Kristen. "Jake wasn't even certain he had been bit. I expected him to be in searing pain if a rattlesnake got him. Jake just said he heard a hiss and didn't see a snake." Kristen found two puncture wounds on Jake's left ankle, but questioned whether they could be a result of the barbed wire fence.

Eventually the puncture area started to swell and turn purple. With no cell service, Kristen, her brother and Jake jumped on a cataraft and headed downriver to find help. "We were so lucky to find an EMT with cell service and a place to land a helicopter at his camp. He orchestrated the evacuation for us. The chopper was there in 30 minutes. Jake was Life Flighted to Emanuel Hospital in Portland." Kristen said the family will now carry a satellite phone on all adventures, forever.

While waiting for the evacuation, Jake said he experienced, "a lot of swelling. Lots of body tingling. And, if I sat up, I felt like I would faint. We kept my leg below my heart. In the chopper it was even worse with all the turbulence. At the hospital, I felt way tingly. My tongue felt really swollen. I felt like I was going to die, my mom was trying to calm me down." Jake notes the chopper ride as the most fun part of the experience.

Four hours after the bite, Jake got anti-venom.


"Don't suck the wound or cut it or use a tourniquet. Don't ice it or wrap it. Just keep the bite area immobilized below the heart. Snake bite kits are useless." — Kirsten Mohill Heron tweet this

Kristen said she now has a few more gray hairs. "I learned a ton from the encounter. At the time, he didn't look that bad. A lay person might have delayed treatment further. The risk then becomes compartment syndrome. This is when muscles swell so much, blood supply is cut off. The tissue has to be cut open to release the pressure in a procedure called a fasciotomy. Jake just dodged a fasciotomy. If you think you got bit, do not delay. Every minute is vital."

Jake spent three days in the Intensive Care Unit and four days in the hospital getting stabilized. After several weeks on crutches and bruising up to his groin, Jake is now walking in a boot. He has many more weeks of rehabilitation ahead to heal the hemotoxic and neurotoxic effects the venom caused. Jake was able to make up for missed school by giving a PowerPoint presentation on his experience.

If it happens to you, Kristen says, "Don't suck the wound or cut it or use a tourniquet. Don't ice it or wrap it. Just keep the bite area immobilized below the heart. Snake bite kits are useless. Keep the person calm and as relaxed as possible. The only antidote is the anti-venom. Singularly focus on that." Because anti-venom is highly volatile and temperature-sensitive, it's only kept in hospitals, not in rescue choppers or first aid kits.

Jake advises, "Try to stay on the trail, wear big boots and long pants—the exact opposite of what I did—sandals, shorts and went off the trail." 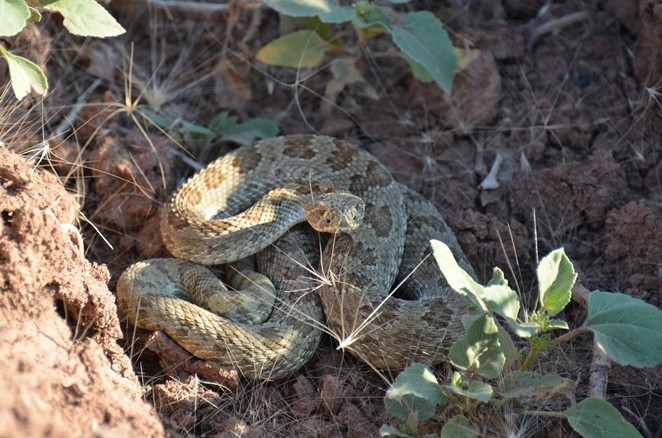 Jake now understands that he likely snuck up on the snake's territory. Striking is a natural defense response. The warning rattle is a blessing that in this case, there wasn't enough time for. Snakes hear vibrations, not sounds. Tapping with a stick out front of your body can give another couple feet (and more time) to warn a rattler of human presence.

Kristen is grateful to have insurance with helicopter transport coverage, "Or we would be bankrupt," she notes. Anti-venom is fairly expensive, as well. "Jake took 21 vials in total between loading doses and several maintenance doses." Some estimates put antivenom vials at $15,000 a pop, and Kristen says they're only produced by one British company. Word to the wise from a mom who knows, "If you hang with rattlesnakes, you better have insurance."

If you think rattlers are only nesting downriver, think again. Two weeks ago, Jenni Peskin and her daughter say they were walking at Pine Nursery Dog Park in Bend and ran into a baby rattler. "He was a really little guy. We let him slither past us on the path into a brush." Living in Bend means wilderness and all its beasts are close in toe when you least—and most—expect it.